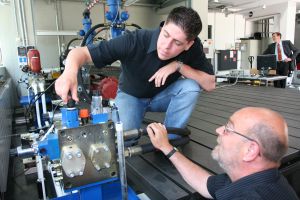 Of all German universities, Karlsruhe Institute of Technology (KIT) ranks in first place (worldwide place 45) in engineering sciences (engineering, computing, and technology) as well as in natural sciences (worldwide place 52). This is the result of the “2011 Performance Ranking of Scientific Papers for World Universities“ published by the National Taiwan University. The ranking measures research performance of universities worldwide based on scientific publications.

Background
The “Performance Ranking of Scientific Papers for World Universities“ succeeds the “Higher Education Evaluation and Accreditation Council of Taiwan“ (HEEACT) ranking that has been published annually since 2007. As from this year, the ranking is published by the “National Taiwan University“. It considers universities only and is based exclusively on the analysis of scientific publications and citations of the past two to ten years. The publication data are taken from ISI – Web of Science (Thomson Reuters), one of the best-known publication databases.

Further information can be found at http://taiwanranking.lis.ntu.edu.tw.