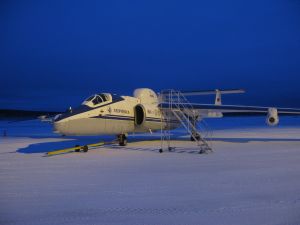 The Geophysica research aircraft serves as a platform to bring the GLORIA measurement instrument up to 20 kilometers height. (Photo: Tobias Guggenmoser/FZJ)

Precise measurements of the atmosphere are indispensable for predictions of climate change and its impacts, as is currently being discussed at the climate change conference in Durban. A group of researchers from Jülich and Karlsruhe will therefore be starting a unique experiment in December in Northern Sweden: For the first time, the GLORIA instrument will fly on board of the Russian research aircraft “Geophysica” and observe climate-relevant gases and atmospheric movements with unprecedented accuracy. These measurements will contribute essentially to improved climate models.


GLORIA is the acronym of “Gimballed Limb Observer for Radiance Imaging of the Atmosphere“. This complicated name refers to a novel type of infrared camera. It decomposes thermal radiation emitted by atmospheric gases into its spectral colors. This allows for a very precise mapping of the gases and their large-area movements. GLORIA was developed by Forschungszentrum Jülich and Karlsruhe Institute of Technology within the framework of an extended investment project of the Helmholtz Association. Worldwide, it is the first of a new generation of measurement instruments to be used on satellites for weather observation in the future. 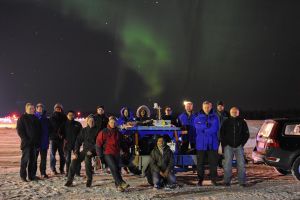 Researchers from Jülich and Karlsruhe at Kiruna, Northern Sweden, with the GLORIA detector in their middle and a polar light above their heads. (Photo: Erik Kretschmer/KIT)

At 10 to 20 km height, GLORIA measures a number of climate-relevant trace gases that are mixed vertically and horizontally by atmospheric exchange processes. Among them are carbon dioxide, methane, ozone, and water vapor as well as many nitrogen and chlorine compounds. For the first time, this new instrument will measure these processes with a very high spatial resolution. “In this way, we will be enabled to test current climate models and to improve them,” says Dr. Martin Kaufmann, physicist at Forschungszentrum Jülich. “Moreover, the height range observed by GLORIA is of enormous importance to the climate: Here, the atmosphere emits the highest amount of heat into space. Greenhouse gases and clouds in this area most significantly affect the energy budget of the earth,” he adds.

The new spectrometer is unique worldwide. It works with a slewable and precisely stabilized infrared camera. It maps air layers below and on both sides of the aircraft. During later data analysis, these images are decomposed into a number of colors. By their “spectral fingerprint”, the different trace gases can be distinguished and their concentrations can be determined very precisely.

GLORIA measurements will also focus on the so-called “gravity waves” in atmosphere. These are strong air turbulences caused by certain weather conditions on the back of mountain ridges among others. They may propagate up to 100 km height. In aviation, these waves are much dreaded, but they also play an important role for the climate. Gravity waves drive global circulation systems in the middle and upper atmosphere. “Obviously, the dynamics of these waves changes with an increasing carbon dioxide concentration in the Earth’s atmosphere,” emphasizes Dr. Peter Preusse from Jülich. “For future climate prognoses, it is therefore very important to exactly understand these effects.”

Felix Friedl-Vallon, physicist at Karlsruhe Institute of Technology, is enthusiastic: “The extremely high spatial resolution of our new spectrometer is unprecedented. Horizontal resolution of GLORIA is 30 km, in vertical direction 200 m. This makes GLORIA better than all instruments used so far by one order of magnitude – an enormous progress!” This is mainly due to a novel type of detector chip that can execute more than 10,000 measurements at the same time and a special maneuver called “tomographic flight” by the researchers. During this maneuver, the “Geophysica” flows around an air package or a turbulent zone on a circular track at a height of 15 to 20 km. GLORIA always focuses on exactly the same coordinates – this is a top performance of GLORIA in terms of control, electronics, and optomechanics at the low pressure and extreme temperatures down to minus 75°C.

GLORIA will climb up above the Arctic in December for four test and measurement flights. After the first successful operation on the “Geophysica”, the spectrometer will be installed on board of the new German research aircraft “HALO” in summer 2012. And the scientists hope that from 2020 an instrument version suited for use in space will supply major climate data within the PREMIER mission on board of an ESA satellite. Due to their age, several European and American environmental satellites will stop work in the years to come. “GLORIA closes the resulting gap in atmosphere research,” explains Hermann Oelhaf, meteorologist at Karlsruhe Institute of Technology.