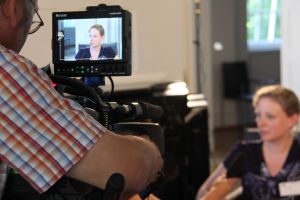 On December 03 and 04, 2011, researchers and communication experts will discuss the future of public science at the ZKM | Center for Art and Media. In the course of the interdisciplinary symposium on “Public Science and New Media. The Role of the Web 2.0 Culture in Science Communication”, the partners of the DFG-funded InsideScience project at KIT will present their results. Representatives of the media are cordially invited to come to the premiere of InsideScience films on Saturday, December 03, 2011, 20.30 hrs.

Science no longer is a matter of a few persons sitting in an ivory tower or behind laboratory doors. More and more institutions are starting a dialog with the public and ever more often, the internet plays a prominent role. Science institutions draw attention to their program in social networks, establish video portals, or twitter their calendar of events. But is this enough? Are there strategies to set certain topics? And what is the use of a “public science” for the citizen? The Science Symposium on December 03 and 04, 2011, will discuss these questions and focus on open network dialogs, modern communication paths, and interactive media.

The symposium is organized by the partners of the InsideScience project at KIT. InsideScience stands for science communication 2.0. for communicating research in internet-adapted, partly animated films. The films want to make science an experience and enable the audience to put themselves in the position of the scientist. The premiere of the first InsideScience films will take place on December 03, 2011, 20.30 hrs, at the ZKM_Medientheater. From Monday, December 05, 2011, the films will be available at the InsideScience YouTube channel as well as at www.kit.edu/inside-science.

Another highlight of the symposium will be the science vernissage, during which an accessible exhibit will be presented. It is an interactive platform, whose size and structure form a “science space” that can be walked on by the visitors in order to pursue own paths of knowledge. The exhibit can be visited on December 03 and 04, 2011, at the ZKM_Medientheater. A cost-free tour will be offered on December 03, 2011, 17.00 hrs.

Interested people as well as pupils are cordially invited to come to the symposium, premiere, and vernissage. Admission will be free.

A detailed program can be found at www.kit.edu/inside-science.

The InsideScience project is carried out by the KIT Collaborative Research Centers 588 “Humanoid Robots” and TR9 “Computer-supported Theoretical Particle Physics” in close cooperation with ZAK | Center for Applied Science and Studium Generale and the Public Relations and Marketing Service Unit (PKM).