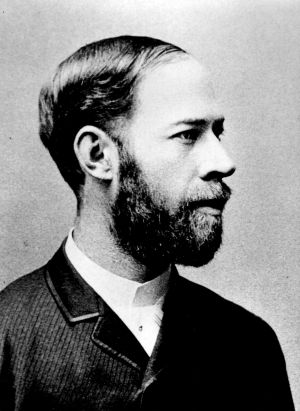 Heinrich Hertz did research and taught in Karlsruhe from 1885 to 1889. (Photo: KIT-Archiv)

Making telephone calls with mobile phones, checking e-mails while being away on business, listening to news in the car: Communication on the way at any time and any place is part of our everyday life. It is made possible by a fundamental physical effect discovered by Heinrich Hertz exactly 125 years ago in Karlsruhe: The electromagnetic wave.

“For the late 19th century, the search for electromagnetic waves was something that corresponds to our search for dark matter or the mass of the neutrino today,” explains Volker Krebs, retired professor at KIT and Chairman of the Heinrich Hertz Society. Existence of electromagnetic waves of finite wavelength was the question most fervently discussed by fundamental researchers at that time. With his measurements, Hertz confirmed the so-called close-range effect theory and demonstrated that electromagnetic effects propagate at the speed of light,” says Krebs. “This initially application-free finding made 125 years ago today is the basis of any mobile phone call and any radio transmission.”

Over several weeks, Hertz conducted his experiments in a lecture hall of the then technical university, today’s Heinrich Hertz lecture hall on Campus South of Karlsruhe Institute of Technology (KIT). Hertz used a sphere gap in an oscillating electromagnetic dipole as emitter. The receiver was a slotted wire ring in which sparks were observed whenever a flashover took place at the emitter. On November 11, 1886, propagation of an electromagnetic wave was observed for the first time with this setup. Thus, James Clerk Maxwell’s close-range effect theory of electrodynamics was confirmed. In additional experiments with mirrors and standing waves, Hertz demonstrated later on that he had generated waves of 30 to 100 cm wavelength and 1000 - 300 MHz frequency. This makes Hertz the pioneer of high-frequency and radio technology that was then transferred to application by Guglielmo Marconi, Alexander Popow, and Ferdinand Braun. The unit of frequency, the Hertz, Hz, is named after Heinrich Hertz.

“For Hertz, Karlsruhe was the first step in his career,” emphasizes Dr. Klaus Nippert, Head of the KIT Archive. At Karlsruhe, 28-year-old Hertz was granted his first position as ordinary professor from 1885 to 1889. He was paid a sufficient salary and used the existing physical collection. The predecessor of Hertz had been Ferdinand Braun, Nobel prize winner in 1909 and inventor of the cathode beam tube that was applied widely as oscilloscope and television tube later on. “In Baden, Hertz left his bachelor existence behind,” knows Nippert. He married the daughter of a colleague and started a family. With his wife Elisabeth and his daughter Johanna, Heinrich Hertz left Karlsruhe after four years and moved to Bonn after having refused appointments to Berlin, Gießen, and America. But as early as in 1894, Hertz died in Bonn from sepsis at the age of 36. He was buried in Hamburg, his place of birth.

“Heinrich Hertz was an excellent researcher and university teacher,” says Professor Horst Hippler, President of KIT. “He was always eager to find out basic physical relationships. KIT is very proud of having him among its academic ancestors.”