KIT Is Growing at an Enormous Speed 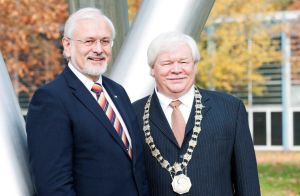 Stamina is the magic word in the further development of KIT, emphasized Presidents Professor Horst Hippler and Professor Eberhard Umbach at this year’s Annual Academic Celebration. An example in the recent past was the draft KIT Act II: “It considerably extends our freedom of action and opens up better opportunities in national and international competition,” said Hippler in his speech. Hippler’s review of the past year, however, focused on the rapid growth of KIT in terms of both third-party funding acquired and number of graduate and Ph. D. students.

“KIT is growing at an enormous speed.” This was the central message of KIT President Horst Hippler at the Annual Academic Celebration. Acquisition of third-party funding from the Deutsche Forschungsgemeinschaft (DFG, German Research Foundation), the EU, and industry increased again. Presently, KIT is active in more than 50 programs relating to research and young scientists. But Hippler pointed out that this also results in special challenges for KIT: Only with sufficient basic funding can the rooms required for the execution of the projects be made available and the operation costs be borne.

Development of the number of students is similar: The total number of 22,500 students at KIT in the current winter semester means an increase of nearly 10% compared to the past year. “With this, our capacities are nearly exhausted. We will have problems when the two final secondary school classes will come in 2012,” said Hippler. Although new buildings were purchased in 2011, further areas are urgently required as are funds for staff, energy, and operation. Since the state government will abolish tuition fees as per the 2012 summer semester, Hippler considers the full and dynamic compensation announced to be a very important step. If added to the tuition fees, however, these funds would have very much improved the framework conditions for the students. Hippler emphasized that KIT will continue its efforts to maintain the high quality of education.

The number of Ph. D. students at KIT also has increased considerably again from 2500 one year ago to 3100. Hippler assumes that up to 800 doctors will leave KIT annually in the next years. “These high figures furnish evidence of the good research conditions at KIT. We are very proud of the development opportunities of our young scientists.”

Conferral of honors and prizes is a traditional constituent of the Annual Academic Celebration. This year, KIT Presidents Hippler and Umbach honored 15 lecturers with department teaching prizes. The prizes in the amount of EUR 10,000 per department serve to improve education. “They clearly show that good education and teaching is highly appreciated by KIT and equivalent to research work,” said Umbach. In addition, promotion of young scientists is of high priority at KIT. This year, nine young researchers were granted Ph. D. awards for excellent Ph. D. theses in the KIT competence fields by Professor Detlef Löhe, KIT Vice President for Research and Information.

Professor Manfred Popp, former Chairman of the Executive Board of Forschungszentrum Karlsruhe, handed over the Otto Haxel Award of the Freundeskreis des Forschungszentrums Karlsruhe e. V. (Friends of Forschungszentrum Karlsruhe). This award is granted for scientific and technical achievements that are expected to result in effective innovations and, hence, major impulses for industry. This year’s award was given to Dr. Max Mertins from Novatec Solar. This company located in Karlsruhe has specialized in the manufacture of solar steam generators based on Fresnel collectors consisting of flat mirror strips. For them, Mertins developed an innovative receiver design with the help of a calculation program and heat losses were reduced by 50%. Now, standard turbines in solar power plants reach higher cost and energy efficiencies.

At the Annual Academic Celebration, the award “Selected Place 2011” was handed over to the KIT project “Aero-Tram – Wide-area measurements of air quality”. The tram operated by the Karlsruhe Transport Authorities is equipped with measurement instruments of the KIT Institute of Meteorology and Climate Research (IMK) to study air quality in the city. Dr. Bernhard Vogel, IMK, accepted the award from Frank Arlaud, Deutsche Bank.

The central scientific speech “Information Makes Markets – and How?!” was delivered by Professor Christof Weinhardt, Head of the KIT Institute of Information Systems and Management. The business engineer and economist is spokesman of the KIT Competence Area of “Technology, Culture, and Society” and one of the heads of the Karlsruhe Service Research Institute (KSRI) at KIT. Referring to selected research projects and applications, Weinhardt explained how information influences market development and how this influence works. Among others, he spoke about automatic trade on financial markets, which is frequently considered to be responsible for financial crises. This is not confirmed by studies made by Weinhardt’s research group. They reveal that technology leaps like those in the XEXTRA system of the Frankfurt Stock Exchange enhance information efficiency and lead to more rapid, fairer prices. Based on the example of flower auctions in Holland, Weinhardt explained that man’s acting is not only influenced by costs and reasoning, but also by emotions and in particular by stress. In the research area of “Physioeconomics”, new processes are developed to analyze the effect of emotion and excitement on decision-finding on the markets and to implement useful applications, e.g. training for emotion control.

The Annual Academic Celebration was framed by the musical program of the Collegium Musicum of KIT conducted by Hubert Heitz. The Celebration was opened by the KIT anthem and the “Ouverture” and “Chanson du Toréador” from Georges Bizet’s opera Carmen. It was completed by the “Aragonaise” and “Marche et Choeur” also from Carmen.