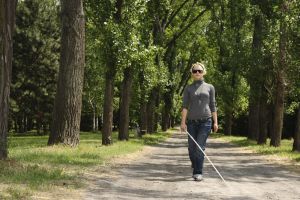 KIT student Jan Patrick Schindler and KIT graduate Matthias Wuest are working on a digital white cane with an integrated navigation system. At the European Satellite Navigation Competition (ESNC), Munich, both were awarded the first prize in the special category of University Challenge yesterday evening, which means that the development of the device will be financed among others under an incubator program in the amount of EUR 75,000.

The idea of both developers combines the navigation technology for driving a car with three-dimensional image processing used in game pads. Visually impaired and blind people are enabled to find their way around both indoors and outdoors without any help. Indoor navigation is based on images taken by cameras integrated in the device. These images are compared with stored floor plan data to show the way to the user. Communication between the device and the visually impaired person may take place via an audio function. “But we are also thinking about other possibilities,” says the economic engineer-to-be Jan Patrick Schindler. The development might also be attractive to seeing persons. For instance, the system might be used as a pilot through public buildings, such as hospitals, big department stores, or event locations.

“I very much thought about how things that are theoretically possible can be implemented technically,” says the diploma student. The project with the working title NAVIP (navigation device for visionally impaired persons) is based on the possibilities of the European navigation system Galileo. “The US-American satellite navigation system GPS reaches an accuracy of about 20 m, which is far too imprecise for pedestrians. With the help of Galileo, however, a position can be determined with a far higher precision,” says Schindler. “But Galileo presumably will not start operation before 2016. Our next step therefore is to develop technical approaches, by means of which a prototype can be tested within a foreseeable period. We plan to present the GPS-based prototype within half a year.” Further development of NAVIP will be supported by the ESNC prize that is associated with an incubator program in the amount of about EUR 75,000 for a duration of twelve months, which is sponsored by a leading supplier of digital map data. In addition, a patent office acting all over Europe will provide patent counseling in the amount of EUR 5,000.

401 ideas from nearly 50 countries were submitted to the ESNC competition organized under the auspices of the Bavarian State Ministry of Economics, Infrastructure, Transportation, and Technology. 180 international experts from industry and research evaluated the ideas. Apart from the use of the global navigation satellite system, major criteria of the jury were the benefit of the application proposed, its innovative character, and prospects of economic success. Jan Patrick Schindler, who was born in Hanover and is now living at Neulingen near Pforzheim, points out that during his studies of economic engineering at KIT with its large scope of technical and economic issues, he has learned to “rapidly understand complex relationships.” Schindler will complete his studies next spring.