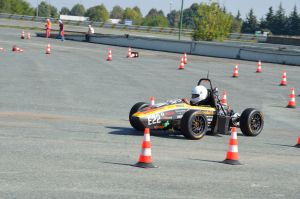 The KIT11e electric vehicle convinced the jury on the race track as well as in the criteria of technical innovation, costs, and energy efficiency. (Photo: KA-RaceIng)

At the “Formula Electric & Hybrid Italy“, an international construction competition, a team of students of KIT won the first place in the class of electric vehicles in Turin last weekend. The “KIT11e” electric vehicle presented by the “Ka-RaceIng” formula student team was found to be the most convincing package of construction and racing performance, finance planning, and sales arguments. The students from Karlsruhe won over eight other teams from Germany and Hungary.

On the IVECO test site in Turin, the teams of students competed with vehicles developed, constructed, and driven on their own. The winner was not the fastest team, but the team with the best overall rating in eight disciplines: Technology, costs, presentation, overall performance, agility and handling, energy efficiency, acceleration, and cornering.

In the most important static discipline “Design Event” focusing on the technical design, the KA-RaceIng team reached the first place with their KIT11e electric vehicle. In the disciplines of “Cost Event” and “Business Plan Presentation”, the students from Karlsruhe ranked in second position. The KIT11e also convinced on the race track and in the dynamic disciplines: During the “Autocross” event, the vehicle was fastest. It reached the first place as well as the best start position for the discipline of “Endurance” covering 22 km, where it came in third. The KIT11e was the second fastest vehicle in the discipline of “Acceleration”. In the “Skid Pad”, it reached place 3. Overall victory was mainly the result of the success in “Efficiency”. KIT11e turned out to be the vehicle with the highest energy efficiency.

KA-RaceIng is the formula student team of KIT. Every year, about 60 students develop, construct, and drive a vehicle each for the international competitions of “Formula Student Combustion“ (for vehicles with a combustion engine) and “Formula Student Electric“ (for vehicles with an electric engine). The victory of KA-RaceIng at the competition of “Formula Electric & Hybrid Italy“ was the first overall victory of a students team from Karlsruhe. The team of Stuttgart University ranked second, the third place was reached by the team from TU München. 2011 was most successful season in the five years of existence of KA-RaceIng. The team also reached international successes with KIT11, the car with the combustion engine.