Gap in the Standard Model of Particle Physics? 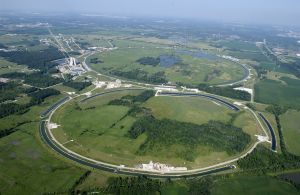 Latest results from the Fermilab Research Center near Chicago add to the evidence of a gap in the standard model of particle physics. Analysis of recent data from the DZero experiment at the Tevatron particle accelerator has now confirmed that the decay of the B-meson particle produces about 1% more muons than their antiparticles, the antimuons. This effect is about 50 times larger than expected. Theoretical physicist Ulrich Nierste from KIT calculated the decay rates to be expected for the experiment.

Why does the universe as we know it exist? Why is there matter? And no antimatter? The excess of matter is not explained by the established standard model. Pertinent research is conducted by Professor Ulrich Nierste from the Institute for Theoretical Particle Physics of KIT. Based on the standard model, Nierste and Professor Alexander Lenz from the TU Munich produced a precise theoretical prediction of the ratio of muons and antimuons expected for the DZero experiment. “Numerous experiments in the last decades excellently confirmed the standard model,” says Ulrich Nierste. “If the deviation found now will be confirmed independently, the doors to new laws of nature will open.” Then, it may also be expected that the new particle accelerator “Large Hadron Collider” (LHC) at the European Research Center CERN will find new particles.

The current study of Fermilab compares theoretical prediction with real data from particle collisions at the Tevatron particle accelerator.

The current study updates last year’s analysis: Meanwhile, about 50% more data have been analyzed and, thus, uncertainty of the result has been reduced. The chance of this effect being a statistic coincidence now is about 0.005% only and, hence, has the status of strong evidence of a scientific discovery. However, science only refers to a real discovery when the percentage is 0.00003% and the result is confirmed independently by other experiments. A new experiment at CERN (LHCb experiment) is presently focusing on measuring the phenomenon observed in another decay channel of the B-meson.

The asymmetry measured in the decay of B-mesons gives the physicists valuable hints to the direction into which the standard model has to be further developed. Development of the standard model to a supersymmetric unified theory may provide a plausible overall conception. Theoreticians worldwide favor such theories. The concept of supersymmetry was developed by Professor Julius Wess and Professor Bruno Zumino (CERN) at the then University of Karlsruhe.

The current publication of Fermilab is presently being reviewed scientifically. On the internet, it can be downloaded at http://arxiv.org/pdf/1106.6308.