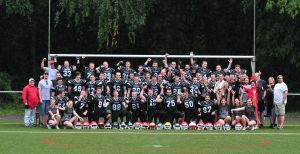 “As the host of the tournament, our team is highly pleased to keep the trophy. But the way to this success was hard work,” tells the team member Sebastian Fünfgeld. Most players of the Karlsruhe Engineers have already gathered experience in the second German football league in this season by playing in the team of the Baden Greifs.

“Teams that have been promoted to the second league are facing harder conditions: Usually, they have to accept many defeats. But this experience turned out to be an advantage at the University Bowl,” says Fünfgeld. In the first game, the Engineers won 35:6 over Hamburg. Also in the following game against the Mannheim Knights, the Karlsruhe Engineers convinced with a high variety of passes and runs. The Engineers won 28:7.

On the second day in pouring rain, the players again competed against the HSU Snipers from Hamburg. Under these difficult conditions, the guests from North Germany had significant problems to move the ball, while the experienced offensive of the Karlsruhe team was hardly impressed by the weather. At halftime, the result was 28:0 for the Karlsruhe team. Then, the Hamburg team stopped the game due to the weather. After this, the Karlsruhe team played against Mannheim for a last time and won by 14:0.

The Karlsruhe Engineers have won the adh Open American Football for the third time in succession. This year, the University Bowl took place for the 22nd time.