Intelligent Wallpaper Wins in the “Land of Ideas“ 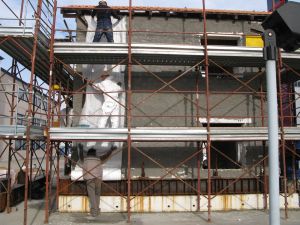 KIT researchers tested the protective effect of the seismic wallpaper on a two—storied building in the Italian city of Pavia. (Photo: Moritz Urban)

The project “Seismic Wallpaper – Intelligent Earthquake Protection” of the KIT Institute of Concrete Structures and Building Materials is granted the award “Ausgewählter Ort 2011” (selected place 2011) in the competition “365 Orte im Land der Ideen” (365 places in the land of ideas). Thanks to its complex fiber structure and special mortar, the innovative wallpaper compensates ground motion. Woven-in optical sensors detect the developing cracks and, thus, monitor the building. Representatives of the media are cordially invited to come to the award ceremony on Friday, July 15.

The award ceremony will start at 9.00 hrs at the Institute of Concrete Structures and Building Materials (IMB), KIT Campus South, building 50.31, lecture hall 107, with a presentation by Professor Lothar Stempniewski, Head of the Concrete Structures Division of IMB. “The smart wallpaper is designed to protect human beings against collapsing buildings or building sections,” explains the engineer Moritz Urban. The wallpaper consists of a textile material with four different fiber directions and is applied using a special mortar. As a result, a building can resist much higher earthquake intensities. Optical sensors that are woven into the wallpaper detect cracks. After shocks resulting from earthquakes, storms, vehicle accidents, or similar events, damage of the building wall can be detected. If necessary, this damage can then be repaired specifically.

On a two-storied building in the Italian city of Pavia, KIT researchers proved that the earthquake protection wallpaper developed in cooperation with several partners really works. The architecture of this building is typical of the region and also of the city of L’Aquila that suffered from a strong earthquake with many casualties in 2009. First, the scientists from Karlsruhe tested the building without any reinforcement on a vibrating table. After 0.4 g acceleration, it nearly collapsed. Then, the same building was provided with the seismic wallpaper and tested again. Even at an acceleration of 0.6 g, only minor damage occurred. It was found and evaluated with the help of the sensors.

“With their ‘seismic wallpaper’, the scientists of the Institute of Concrete Structures and Building Materials show that an unexpected innovative potential may be hidden in any supposedly normal object of everyday life,“ explains Frank Arlaud from the Deutsche Bank, who will present the award to the project team on July 15. The Germany-wide competition “365 Orte im Land der Ideen” (365 places in the land of ideas), an activity of the initiative “Germany – Land of Ideas” and Deutsche Bank, reveals the potentials of Germany as a location of innovation, the creativity and commitment of enterprises, institutions, social and cultural facilities. The competition is organized under the auspices of the Federal President. The project “Seismic Wallpaper – Intelligent Earthquake Protection” won over 2600 applications for the award this year.

The program of the award ceremony can be found at:
http://www.imb.kit.edu/mb/