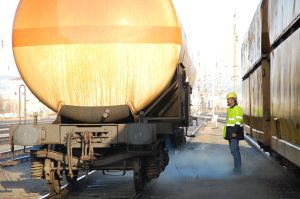 Keeping doors and windows closed or evacuating the population nearby? After chemical transportation accidents, such as the derailed freight train at Müllheim in mid-May, the emergency forces often have to make serious decisions. To support them, the Institute for Industrial Production (IIP) of KIT has developed the DIADEM information and communication system together with partners from all over Europe. Recently, the developers presented DIADEM at a workshop in Copenhagen and tested it together with users.

“In case of a chemical transportation accident, it is most important to collect information, for instance: Is there a gas plume and where does it move?”, says Tina Comes from the IIP. Among others, the decision as to whether the population nearby has to be evacuated depends on this information. DIADEM considers information supplied by sensors for gas recognition and observation as well as by propagation models. To improve information about the gas plume and its propagation, this component of DIADEM can send short messages to the population nearby in order to gather information. In case of strategic decisions, it is also necessary to analyze the risks of the countermeasures in detail for all parties affected: “In practice, precise, reliable information on potential consequences of the measures to be taken are often lacking. To make good decisions, decision support methods are required, which consider these uncertainties.” Together with scientific and industry partners from the Netherlands, Sweden, Denmark, Belgium, and Romania, the IIP team under the direction of Professor Frank Schultmann developed DIADEM (Distributed Information Acquisition and Decision Making in Environmental Management): An information and communication system to support the protection of the population and the environment after chemical transportation accidents. Users can access the system via a computer or a PDA (Personal Digital Assistant) and enter or call up texts, language, or maps. The project is funded by the European Union under the 7th research framework programme.

The IIP has developed tools to support joint decisions. Scenarios tailored to certain cases are used as a basis for the task forces discussing potential measures. A scenario is a plausible development of the situation. To consider uncertain information, various scenarios are developed. For instance, does the gas plume move across a densely populated area? To compare various action alternatives, the scientists apply the multiple-objective decision support method. This is a method considering a number of aspects extending from potential health risks to the expenditure associated with an evacuation to economic impacts. Using the methods developed, the priorities of all actors involved can be considered and a consensus can be reached among the different interest groups. Economic interests, for instance, are ranked behind the well-being of the population. “By combining these two methods, we prevent concentration on individual, possibly highly impressing or evident scenarios, and the users can make a balanced decision,” says Tina Comes.

Representatives of authorities, the police, and firefighters recently tested DIADEM at a workshop in Copenhagen. It was assumed that a hazardous goods train derails and chlorine is released. In the practical test, the task forces had to guarantee the protection of the population, close the leak of the rail car, remove the remaining chlorine, and restore train traffic. “We wanted to test the interaction of the parties involved, from meteorologists to those making the decisions and being responsible for it”, explains Comes. “We also wanted to get a feedback of future users: Is the user interface user-friendly? Are the visualizations understandable?” According to Tina Comes, the workshop participants above all appreciated the training and decision support in particular in case of rare events.