tourEUCOR Will Take Place from June 9 to 13 in Germany, France, and Switzerland. 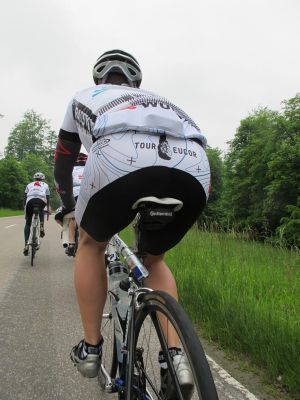 700 kilometers in five days. Students, professors, staff members, and alumni from institutions of the “European Confederation of Upper Rhine Universities“ (EUCOR) will show that this cannot only be done by professional bikers. From June 9 to 13, they will take part in the tourEUCOR passing the university cities of Karlsruhe, Strasbourg, Mulhouse, Basel, and Freiburg. The bicycle tour is organized by a team of students from Karlsruhe Institute of Technology (KIT).


tourEUCOR will start on June 09 at 8.15 hrs at Karlsruhe Castle. 120 participants will go on the tour of five days’ duration through Germany, France, and Switzerland. “tourEUCOR embodies the idea of the EUCOR Confederation, living international exchange,” says KIT President Horst Hippler, who has been appointed EUCOR president for the second time since late 2010. “On the Upper Rhine with the regions of Basel, the Alsace, and Baden, we have the opportunity to be active in teaching and research in a border-crossing manner. This was realized by the EUCOR universities long ago.”

As in the past years, the participating bikers will be split up into groups of various performance levels: While the ambitious bikers will climb the summits of the Black Forest and Vosges Mountains, the “hobby bikers” will ride on the flatter roads along the river Rhine. Transport of the baggage and catering of the bikers will be organized by an accompanying team of twelve voluntary helpers studying economics. 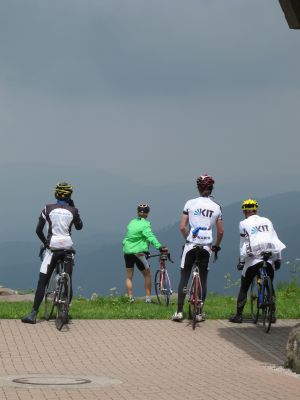 The view after climbing is part of the
tourEUCOR program. (Photo: tourEUCOR e.V.)

The sportive highlight of the tour will be the time trial on the 1284 m high Schauinsland mountain in the penultimate stage from Basel to Freiburg on June 12. “Then, the second hand will be in the center of attention. Whoever wishes to do so is free to face the challenge of 650 m in altitude over a distance of 6.5 km only”, says Yannick Zapf from the tourEUCOR organizaton team. “However, highest sports performance is not so important. It is more important to have a joint experience and the opportunity to look beyond country borders and to meet members of other universities during an informal event.“ The students’ association tourEUCOR e.V. organizes the bicycle tour for the 14th time already, in cooperation with the universities involved.

On June 13, tourEUCOR will then return to Karlsruhe. At about 17 hrs, the bikers will arrive at Karlsruhe Castle again. The closing ceremony will then start with a welcome address given by KIT and EUCOR President Horst Hippler at 19 hrs. It will be followed by a show and party program for the participating bikers and the organization team. Representatives of the media are cordially invited.

About EUCOR
The Confederation of Upper Rhine Universities, briefly called EUCOR, was founded in 1989. The border-crossing trinational confederation of universities from Karlsruhe, Freiburg, Strasbourg, Mulhouse, and Basel is unique in Europe. Its basic idea is the pooling of the strenghts of these universities to develop joint research projects and to grant students free access to studies at the other universities.