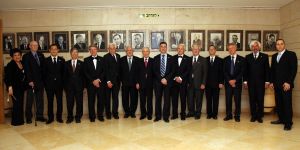 The physicist Maximilian Haider, honorary professor at KIT, is one of the laureates of this year’s Israeli Wolf Research Prize in the amount of about US$ 100,000 in the category of physics. Haider received the prize on May 29 together with Harald Rose, professor at the Technical University of Darmstadt/Ulm University, and Knut Urban, professor at Jülich Research Center. Israel’s State President Shimon Peres handed over the prize at the Israeli Parliament, the Knesset.

“This distinction of our joint work by the Wolf Foundation at the Knesset is a recognition of my long years spent to bring the resolution of electron microscopy to its theoretical limit,” said Maximilian Haider after the prize ceremony. “We improved a major tool for materials science to a considerable extent and it is now possible to study and to better understand properties of materials on the atomic scale.”

In 1990, the three scientists started a joint project to correct the aberration of electron-optical lenses that had been known for about 60 years. Rose proposed a theoretical concept, Haider implemented it in an instrument. In 1997 already was a breakthrough in the improvement of resolution reached using this laboratory pattern. Aberration is corrected by novel “noncircular” electron optics consisting of so-called magnetic multipoles. They influence the electron beams such that the aberration of an objective lens is compensated, as does a pair of glasses for an ametrope. The result is a strongly improved image resolution.

In 2001, work of the scientists resulted in the first application-oriented commercial prototype of a new generation of electron microscopes. The new methods allow for the observation of single atoms at a very high resolution of about 50 pictometers. One pictometer corresponds to a billionth of a millimeter and, hence, to a distance that is about a hundred times smaller than the diameter of an atom.

Maximilian Haider, who was born in Austria in 1950, founded and manages the CEOS company, Heidelberg, which emerged from the project. Worldwide, 200 microscopes are currently being used at universities and research laboratories on the basis of the new electron optics, of which more than 90% are made by CEOS.

Since 2008, Maximilian Haider has been an honorary professor at Karlsruhe Institute of Technology and member of its Laboratory for Electron Microscopy.

Since 1978, the Wolf Foundation has been granting the prize annually “for merits for the benefit of mankind and amicable relations of the peoples” in the categories of medicine, chemistry, agriculture, physics, and for new concepts in arts. In natural science, the prize is among the most renowned prizes worldwide.

Further information on the Wolf Prize at: http://www.wolffund.org.il/main.asp