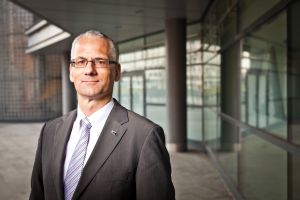 Today, Dr. Joachim Knebel, Chief Science Officer of Karlsruhe Institute of Technology and Spokesman of the Helmholtz Nuclear Safety Research Programme, was granted the European Science Culture Award. The award of the PRO EUROPA European Foundation for Culture was handed over to Joachim Knebel today at the Jahrestagung Kerntechnik (Annual Nuclear Engineering Conference) that takes place at the Berlin Congress Center from May 17 to 19.

In its statement, the European Foundation for Culture that grants the 2011 European Science Culture Award to Joachim Knebel points out: “With this award, we appreciate Knebel’s scientific merits for the partitioning and transmutation technology for the reduction of the radiotoxicity of high-level waste and the associated closure of the nuclear fuel cycle.”

Karlsruhe Institute of Technology and in particular the scientific institutes working under the Nuclear Safety Research Programme (NUKLEAR) have been dealing extensively with the technology of partitioning and transmutation (P&T) for about fourteen years. The NUKLEAR programme was headed by Joachim Knebel from 2002 to 2010.

The P&T strategy encompasses the chemical or electrochemical partitioning of plutonium and the minor actinides of neptunium, americium, and curium from short-lived radionuclides (mainly fission products) and their subsequent conversion into stable or short-lived isotopes by neutron reactions in special accelerator-driven systems (transmutation). As the radiotoxicity (i.e. the hazard potential) is determined mainly by plutonium and minor actinides, it can be reduced significantly by the separation of these nuclides.

In 2005, the team headed by Joachim Knebel succeeded in initiating the largest European transmutation project EUROTRANS and have it approved by the European Commission. This project bundled scientific competences of about 400 scientists from 15 European countries and the USA, Russia, Belarus, and Japan to develop a feasible transmutation machine within a period of five years. The 36 partners from industry and research, together with 17 universities, submitted a scientifically qualified concept that is now planned to be implemented under the name of MYRRHA within the European Strategy Forum for Research Infrastructures (ESFRI) at the Belgian Nuclear Research Center SCK-CEN in Mol. Under the direction of Joachim Knebel, the research team in Karlsruhe has laid the scientific-technical cornerstone for a transmutation machine becoming reality and the recycling of high-level waste coming one step closer.

European Culture Awards are granted for excellent services, initiatives, and cultural achievements in various categories, among others in science. They are under the auspices of the President of the Council of Europe and the European Parliament and are awarded to persons in recognition for their commitment to and their talents in European culture and science.