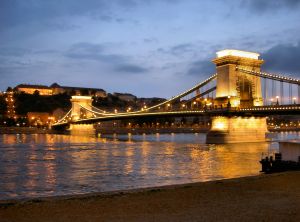 A successful and close cooperation celebrates its anniversary: The partnership between KIT and TWU Budapest has been existing since 1970. (Photo: pixelio.de)

On the German-Hungarian University Days from May 12 to 13 in Karlsruhe, 15 Hungarian universities will inform about studies and research in Hungary. The celebration of the 40th anniversary of the partnership between Karlsruhe Institute of Technology and the Budapest Technical University of Business Science (TWU) will be the highlight of these two days organized by the German Academic Exchange Service (DAAD) in cooperation with KIT.

The university fair at the Audimax (Strasse am Forum 1, building 30.95) on KIT Campus South will offer an extensive program with information exchange, lectures, and presentations. Among others, German and English study programs in Hungary and funding offers of DAAD will be presented. The German-Hungarian University Days will take place in Germany for the first time. They started in 2008 in Budapest. The beginning will be on Thursday, May 12, 14.30 hrs. During the official opening at 17.30 hrs, KIT President Horst Hippler and the Hungarian Ambassador in Germany, Dr. Jószef Czukor, will speak. Then, at 18.15 hrs, Dorothee Janetzke-Wenzel, Ambassador of the Federal Republic of Germany in Hungary will talk about “The German-Hungarian Relations since 1989: Science, Culture, Econo-my.”

An overview of German and English study programs in the humani-ties and social sciences, economics, and medicine will be given by representatives of various universities in Budapest and Pécs on Friday, May 13, from 9 hrs. In addition, exchange students, who attended a Hungarian university under the Erasmus Programme of the European Union, will speak about their experience. At 11 hrs, a colloquium will start on “Research Cooperation with Hungary.” Among others, chances of German PhD students and young scien-tists in Hungary will be in the focus.

40 Years Partnership between KIT and TWU Budapest
The anniversary of the partnership of KIT and TWU Budapest will be celebrated with lectures by German and Hungarian scientists on Friday, May 13, 14.30 to 17 hrs, at the Akademisches Auslandsamt of KIT, Adenauerring 2, building 50.20). On this occasion, KIT Vice President Dr. Elke Luise Barnstedt will welcome the President of TWU Budapest, Professor Gábor Peceli, and the General Secretary of the DAAD, Dr. Dorothea Rüland. On May 08, 1970, the presidents of both universities signed the cooperation contract for the promotion of scientific and cultural contacts. This agreement provided for the first official partnership between two universities of the People’s Republic of Hungary and the Federal Republic of Germany after the Second World War and was concluded even prior to the establishment of official diplomatic relations between both countries. In 1992, the contacts led to the establishment of a German engineering program at TWU Budapest covering several subjects. “To date, an extensive mutual scientific exchange has taken place” says Professor Bernhard Heck, the commissioner of KIT’s Senate for the cooperation with TWU Budapest. A number of joint research projects, publications, PhDs, and postdoctoral lecture qualifications resulted from the cooperation. Apart from the DAAD, renowned German industrial companies have been supporting student exchange between Karlsruhe and Budapest, says Heck. An important element of future cooperation between KIT and TWU Budapest will be cooperation in the fields of energy and sustainable development, emphasizes the Head of the International Office, Achim Niessen.