For His Commitment to German-French Relations, Professor Horst Hippler Is Granted the Honorary Doctorate by the École nationale supérieure d’arts et métiers (ENSAM), Member of ParisTech 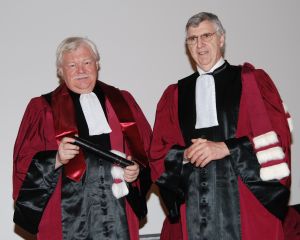 Scientific exchange must be international – this is the opinion of the President of Karlsruhe Institute of Technology (KIT), Professor Horst Hippler, and this is what he has been working for for many years. For his long-lasting merits in German-French cooperation of universities, he is now granted the honorary doctorate by ENSAM, member of ParisTech. This award is to appreciate in particular Hippler’s commitment to the cooperation of Karlsruhe with ENSAM and the universities of ParisTech.

This year, ParisTech is awarding its honorary doctorate for the first time as a university alliance. “It is not only a premiere for the ParisTech Alliance of the Grandes Ecoles in Paris to award this honorary doctorate. Also for me, it is the first award of this kind. I am very happy about this honor, because I have been feeling closely related to France not only as a President of KIT, but also personally for years,” said Hippler in his acceptance speech. Hippler emphasized that he considered the award an incentive to continue his work. The laudation was given by Professor Godefroy Kugel, Director of ENSAM and advisor of the German-French Initiative (DeFi) at KIT.

International cooperation in research and teaching “beyond one’s own nose” is important to Professor Horst Hippler, born 1946, also in view of his own biography. After studies of physics at Göttingen, he moved to French-speaking Switzerland to the Ecole Polytechnique in Lausanne, where he did his PhD. Following his postdoctoral lecture qualification in Göttingen, Hippler was appointed ordinary professor of physical chemistry in Karlsruhe in 1993. In 1998, he spent one year as a guest professor at the Université de Lille 1.

In 2002, Hippler was elected president of the former Universität Karlsruhe (TH). He successfully continued working in the Confederation of European Universities on the Upper Rhine River (EUCOR). After 2002/03, he was appointed president of the association for the second time in 2010/11. From 2002 to 2004, Hippler worked in the coordination committee of the German-French University. Since 2006, he has been representing the conference of German university presidents in the council of the German-French University. Hippler’s commitment to the networking of KIT with French universities among others has resulted in a very close and fruitful cooperation with ENSAM, the Institut national des sciences appliqués (INSA) de Lyon, and the Institut polytechnique de Grenoble.