Tracking down Antimatter in the Universe

On April 29, the AMS-02 Alpha Magnetic Spectrometer Takes off for the ISS International Space Station

On the launch pad: Endeavour space shuttle with AMS-02 detector on board. (Photo: NASA/AMS)

On April 29, 2011, the AMS-02 Alpha Magnetic Spectrometer will take off from the NASA launch site Cape Canaveral (Florida) to the International Space Station ISS on board the space shuttle Endeavour. AMS-02 will measure the composition of cosmic radiation with as yet unequaled precision. The focus will be on searching for antimatter which according to cosmological models occurs as a big bang relic. Besides, AMS-02 is expected to contribute to answering questions about the nature of dark matter. Scientists from Aachen and Karlsruhe are in charge of the German contribution to the experiment.

Being the last but one flight within the US Space Shuttle program, the last takeoff of the space shuttle Endeavour is scheduled for April 29, 2011. With the AMS-02 fundamental research experiment on board, the Endeavour will fly to the International Space Station ISS.

In close cooperation with the NASA, the AMS-02 detector, 4 m in length and approximately 7000 kg in weight, was designed in an international collaboration of 56 research institutes from 16 countries. Some of its essential components were built by RWTH Aachen and the Karlsruhe Institute of Technology (KIT). The research work is supported by the Space Administration of the German Aerospace Center (DLR) with funds from the Federal Ministry of Economics and Technology (BMWi).

The AMS-02 spectrometer is for cosmic rays what the Hubble Space Telescope is for the visible component of the universe. By precise measurement of the cosmic radiation, astroparticle physicists hope to track down the nature of the invisible “dark” matter and to ultimately answer the question as to wheter there are antimatter galaxies in the universe. Knowing that in the dense plasma of the early universe, virtually the whole matter of the universe came into existence a few minutes after the big bang, one is left with two exciting puzzles: Were identical amounts of antimatter produced at the same time, as expected from accelerator experiments? Was that antimatter destroyed completely through its annihilation with matter?
“If AMS-02 succeeded in detecting just one single antihelium nucleus, we would have strong evidence for the existence of galaxies made up of antimatter,” explains Prof. Wim de Boer who teaches Cosmology and Particle Physics at KIT and heads the AMS group. Considering that matter and antimatter annihilate each other, such “antigalaxies”, however, are bound to be far away from the known galaxies. “It is conceivable,” de Boer explains “that larger antimatter quantities were catapulted in a different direction and that a reaction with the visible matter was prevented in that way. It would be even more spectacular to find an anticarbon nucleus consisting of six antiprotons plus six antineutrons because such heavy nuclei cannot be produced in collisions but can only be “baked” in collapsing stars from antimatter.” 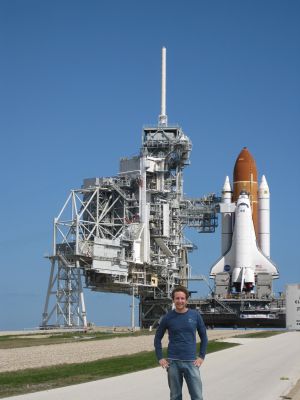 So far, dark matter particles have been perceived only through their gravitational force. Since these particles are electrically neutral, they can be their own antiparticles and destroy each other when colliding. Their predicted annihilation could be an additional source for antimatter, which could manifest itself as additional components in the energy spectra of cosmic antimatter with the background coming from the production of antimatter by collisions of cosmic rays with the gas of the Galaxy. 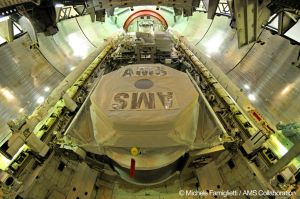 “AMS-02 is a highly sensitive particle spectrometer. By using it on the ISS, we can not only identify each single particle or antiparticle by its mass and charge but are also able to make high-precision measurements of the energies of all particles,” outlines Professor de Boer. “Dark matter annihilation provides antimatter with higher energy than the antimatter “background” coming from ordinary collisions between matter particles”.

At the Houston Mission Control Center of the NASA, payload commander Dr. Andreas Sabellek from the Institute of Experimental Nuclear Physics of the Karlsruhe Institute of Technology will for the first time start up the AMS-02 detector in space two hours after takeoff. At the same time, he will activate the transition radiation detector for positron identification, the major German contribution to the AMS detector, for condition and, above all, temperature checks during the two-day flight to the ISS. 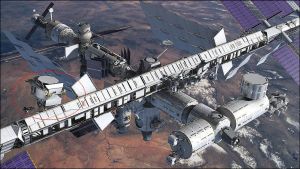 Model of the International Space Station ISS. The intended position of the AMS-02 detector is circled in red on the left below. (Photo: NASA/AMS).

The particular feature of this space experiment is to build complex, sensitive particle detectors that can resist the mechanical stresses during takeoff and the thermal stress in space: the ISS orbits the Earth every 90 minutes. During orbiting, the outer surface of the detector is subjected to temperatures in the range of -30 to +60°C. Due to the thermal multilayer insulation covering the entire detector, the inside temperature varies only by a few degrees. Further challenges are the reduction of the power consumption by an order of magnitude compared with earth-borne detectors. Nevertheless, the cooling of the limited power in the perfect vacuum of space is still a problem: heat can only be removed by infrared radiation. Furthermore, the limited bandwidth of the high data rate (up to 2000 cosmic ray particles cross the detectors every second!) requires an intelligent compression of the data before being transferred to the Earth. KIT has contributed significantly by developing sophisticated space qualified electronic systems that are also capable of reducing data.

Prior to the flight of AMS-02 to the ISS, the entire detector was successfully tested in the large-scale space simulator of the Technology Center of the European Space Agency ESA in the Netherlands and in particle beams of the European Accelerator Laboratory CERN in Geneva. It was proven that the modern particle physics detector designed for operation in space can fulfill all requirements. The thorough testing of the many subdetectors for particle identification make AMS-02 optimally prepared for the long-time anticipated measurements of cosmic radiation aboard the International Space Station until at least 2020.