From Research Model to an Instrument Used by Weather Services 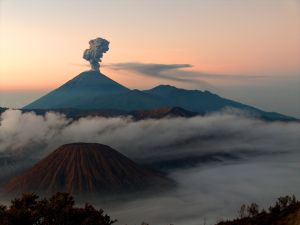 After the eruption is before the eruption: KIT helps experts to better pursue the dispersion of volcano ashes. (Photo: photocase.de)

After the eruption of the volcano on Iceland one year ago, researchers of the Institute of Meteorology and Climate Research (IMK) extensively worked on methods to improve the observation and forecast of the dispersion of ash plumes. Now, they have presented their findings in scientific articles. These articles also cover the question of how an ash plume affects air quality and health. The results are of high use among others to the German Weather Service (DWD).

The scientists studied the dispersion of the ash plume of the Eyjafjallajökull volcano above central Europe in mid-April 2010. Their analyses are based on remote measurements from the ground using a network of optical methods, such as ceilometers and lidar devices. They reveal that the first cloud on April 16 and 17, 2010, essentially consisted of a several hundred kilometers wide and a few hundred meters thick ash layer that moved southwards above Germany. It subsided due to descending winds in a high-pressure area extending over several hundred kilometers.

In the morning of April 17, 2010, the plume reached the Alpine foothills and partly dissolved. These findings were confirmed by analyses of air movement and observations from mountain observatories. Based on measurements by the Atmospheric Environmental Research Division (IMK-IFU) with an ultra-light aircraft, the scientists discovered the arrival of a second plume of volcanic material in South Germany.

Moreover, the researchers simulated the dispersion numerically using two three-dimensional models: The climate-chemistry model MCCM of IMK-IFU, Garmisch-Partenkirchen, and COSMO-ART of the Troposphere Research Division (IMK-TRO), Karlsruhe. While the former is designed for emission and air quality analyses based on an internationally widely used meteorology model, the latter model is designed for the interaction between air quality and climate. The MCCM model was used to calculate the displacement of the ash plume from the place of eruption in Iceland to central Europe over several days. Like the measurements, the simulations revealed the dispersion of a flat, spatially extended plume. “The arrival times simulated by MCCM are in very good agreement with the measurements, except for the Alpine foothills,” says Professor Stefan Emeis from IMK-IFU.

According to Dr. Peter Suppan from IMK-IFU, these activities confirm “that the ash plume can be observed in a cloudless sky with ground-based optical remote measurement methods.” It was also documented that official measurement stations in South Germany recorded a major increase in fine dust, with concentrations exceeding limit values. The scientists are sure: “Chemical analyses clearly prove the presence of the ash plume.” Another major finding: Numerical dispersion models like MCCM are able to correctly calculate the dispersion of an ash plume. “And it is proved for the first time that a ceilometer network is suited for checking the quality of dispersion models,” says Suppan. It is also shown by the work that mountain ranges, such as the Alps, considerably influence the dispersion of ash plumes.

In close cooperation with the German Weather Service (DWD), the scientists started to operate COSMO-ART during the eruption already. In this way, the DWD was enabled to forecast the ash plume over a period of 72 hours and in intervals of six hours parallel to daily weather forecast. Spatial resolution in horizontal direction amounted to seven kilometers in the complete model area. This forecast chain was maintained over the complete duration of the eruption of the volcano and did not only consider forecasts made by other research institutions, but also measurements of atmospheric variables like air pressure or temperature. “This demonstrably improved the quality of the model results,” says Dr. Bernhard Vogel from IMK-TRO. During the eruption, the researchers made aerosol measurements in order to check the results. “As six model results are available for every point of time of forecast,” Vogel explains, “first probability statements can be made as to whether the ash concentration exceeds the limit value relevant to air traffic.” In case of future volcano eruptions, COSMO-ART will be used as a standard instrument by DWD in cooperation with IMK-TRO.

Simulation of the dispersion of the Eyjafjallajökull plume over Europe with an operational version of COSMO-ART, Vogel, H., J. Förstner, B. Vogel, Th. Hanisch, B. Mühr, U. Schättler, prepared for submission to Atmos. Chem. Phys. Discuss Atmospheric CP