Towards a More Efficient Use of Solar Energy 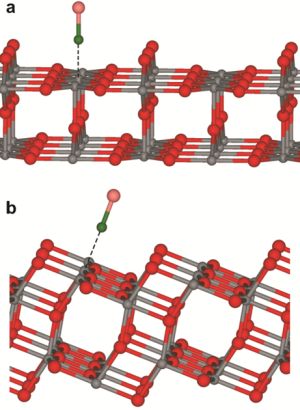 Titania can be used to convert light into chemical energy. Such photocatalytic processes are much more efficient for the titania modification anatase (b) than for rutile (a) (Photo: Dr. Mingchun Xu, Ruhr-Universität Bochum)

The exploitation and utilization of new energy sources are considered to be among today’s major challenges. Solar energy plays a central role, and its direct conversion into chemical energy, for example hydrogen generation by water splitting, is one of its interesting variants. Titanium oxide-based photocatalysis is the presently most efficient, yet little understood conversion process. In cooperation with colleagues from Germany and abroad, scientists of the KIT Institute for Functional Interfaces (IFG) have studied the basic mechanisms of photochemistry by the example of titania and have presented new detailed findings.

Even though hydrogen production from water and sunlight by means of oxide powders has been studied extensively for several decades, the basic physical and chemical mechanisms of the processes involved cannot yet be described in a satisfactory way. Together with colleagues from the universities of St. Andrews (Scotland) and Bochum and Helmholtz-Forschungszentrum Berlin, scientists at KIT’s Institute for Functional Interfaces, headed by Professor Christof Wöll, have succeeded in gathering new findings on the fundamental mechanisms of photochemistry on titanium dioxide (TiO2).

Titanium dioxide, or titania, is a photoactive material occurring in nature in the rutile and anatase modifications, the latter of which being characterized by a ten times higher photochemical activity. When the white TiO2 powder, which is also used as a pigment in paints and sunscreens, is exposed to light, electrons are excited and can, for example, split water into its components oxygen and hydrogen. The hydrogen produced in that way is a “clean” energy source: No climate-killing greenhouse gases are generated but only water is produced during combustion. Titanium dioxide is also used to manufacture self-cleaning surfaces from which unwanted films are removed through photochemical processes triggered by incident sunlight. In hospitals, this effect is used for sterilizing specially coated instruments by means of UV irradiation.

So far, the physical mechanisms of these photochemical reactions on titania surfaces and especially the reason for the much higher activity of anatase could not be explained. The powder particles used in photoreactors are as tiny as a few nanometers only and are thus too small for use in studies by means of the powerful methods of surface analysis. By using instead mm-sized single-crystal substrates, the researchers were for the first time able to precisely study photochemical processes on the surface of titanium dioxide by means of a novel infrared spectrometer.

Using a laser-based technique, the scientists, in addition, determined the lifetime of light-induced electronic excitations inside the TiO2 crystals. According to Professor Christof Wöll, Head of the IFG, exact information about these processes is of great importance: “A short lifetime means that the excited electrons fall back again at once: We witness some kind of an internal short circuit. In the case of a long lifetime, the electrons remain in the excited state long enough to be able to reach the surface of the crystal and to induce chemical processes.” Anatase is particularly well suited for the latter purpose because it is provided with a special electronic structure that prevents “internal short circuits”. Knowledge of this feature will allow the researchers to further optimize shape, size, and doping of anatase particles used inside photoreactors. The objective is to develop photoactive materials with higher efficiencies and longer lifetimes: “The results obtained by Professor Wöll and his co-workers are of great importance regarding the generation of electrical and chemical energy from sunlight, and especially regarding the optimization of photoreactors,” says Professor Olaf Deutschmann, spokesman of the Helmholtz Research Training Group on “Energy-related Catalysis”.

The results obtained by the researchers have been published in Physical Review Letters. The online version of the paper is available on http://prl.aps.org/abstract/PRL/v106/i13/e138302