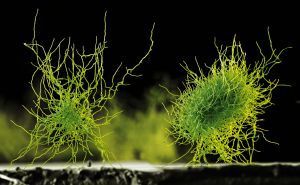 Mycelium of the Aspergillus niger mold fungus. This fungus is not only used to extract citric acid, but also for many modern bioengineering applications. (Photo: BASF SE)

Microorganisms are among the most successful organisms in the world and irreplaceable for life on Earth. Their enormous significance and variety are accounted for by the conference of the Association for General and Applied Microbiology (VAAM) from April 3 to 6 in Karlsruhe. This year’s conference organized by scientists from Karlsruhe Institute of Technology (KIT), Max Rubner Institute, and BASF SE will focus on cellular biology, environmental microbiology, bioengineering, and microbial communities.

More than 1200 microbiologists from Germany and abroad are expected to attend the conference that will take place at the Stadthalle and start on Sunday, 16.00 hrs, with the public presentation: “The Last Meters to the Tap: Microbiology in the Drinking Water Pipe.” The lecturer will be Professor Hans Curt Flemming from the University of Duisburg-Essen. He will bring light into the grey area of house installations. Here, even the best drinking water may lose its quality in particular when unsuitable materials are used, but also by additional devices for “water improvement”. How good is monitoring? Which materials are permitted and licensed? How can problems be avoided? Do we all have to drink water from bottles? These and other questions will be answered by the presentation.

On the following days, 17 plenary presentations will be given by internationally leading scientists. For example, Professor Antje Boetius from the Max Planck Institute for Marine Microbiology, Bremen, will provide insight into the fascinating world of the deep sea. She will concentrate on the microbial decomposition of hydrocarbons, such as petroleum. After the catastrophe in the Gulf of Mexico last year, this topic is of high current importance. Another current aspect of microbiology will be covered by Professor Don Cowan from the University of Western Cape, South Africa: Only very few microor-ganisms are cultivable by man. With molecular methods it is now possible to open up the gigantic potential of non-cultivable bacteria. Professor Peter Graumann from the University of Freiburg and Dr. Stephen Osmani from Ohio State University, USA, will present latest findings regarding the structure and functioning of cells of bacteria and fungi. Plant-microbe interactions will be dealt with by Assistant Professor Dr. Jens Boch from the University of Halle-Wittenberg and Professor Paola Bonfante from the University of Turin. They will report about plant-damaging bacteria and symbiotic fungi.

A number of exhibitors will accompany the conference and present their products. New technologies will be described in workshops. At the career symposium, young scientists may inform themselves about professional chances in this field. Among others, Ulrike Gerischer, science coordinator at the Max Planck Institute for Biophysical Chemistry, Göttingen, will speak about the “Plan B” in the academic career. More than 200 mainly young scientists will present their activities in short lectures and by more than 660 posters. On Monday, April 4, the VAAM will grant a research award to an excellent young scientist. In addition, four awards will be granted to Ph. D. students for excellent Ph. Ds. in the field of microbiology. “The VAAM conference is not only a forum for established microbiologists, but also a platform for young scientists to familiarize with the numerous aspects of microbiology in fundamental research and application,” underlines the chairman of the conference, Professor Reinhard Fischer from the KIT Institute for Applied Biosciences. The VAAM attaches high importance to giving young scientists the opportunity to present their work. “Microbial research in Germany is accomplished mainly by Ph. D. students. Scientific breakthroughs do not only depend on a good idea of the supervisor, but also and always on experimentally skilled hardworking scientists,” says Fischer. The VAAM conference will also consider the work-life balance. Fischer is rather pleased that children will be cared for at the conference venue, such that parents will be able to attend the conference.

The Association for General and Applied Microbiology (VAAM) celebrated its 25th anniversary last year. It represents about 3300 scientists who have specialized in microbiology and work in industry and research. The scope of research extends from bacteria and fungi in food stuffs and water bodies to pathogens, genome analyses, and the industrial use of microorganisms and their enzymes.

More information on the conference is offered at: www.vaam2011.de

Background Information on Microbiology:
Although microorganisms have a size of a few thousandths of a millimeter only, they are among the most successful organisms in the world and irreplaceable for life on Earth. Their small size is more than compensated by their number. A gram of soil may contain several millions of bacteria, fungi, and other microorganisms. They are found in the perpetual ice of the pole regions and high mountains as well as in hot springs in the deep sea. And they also play a big role for man, as they live on our skin and in our digestive tract. The total number of microorganisms colonizing us exceeds by far that of our own body cells.

The modern era of microbiology started in the last 19th century. Diseases like tuberculosis, diphtheria, cholera, or pest are caused by bacteria and killed thousands of people annually in former times. Renowned scientists like Emil von Behring, Robert Koch, Paul Ehrlich or Louis Pasteur studied these infectious diseases. Thanks to their pioneer activities, these diseases were found to be caused by bacterial infections, vaccines were developed, and the hygiene standards in hospitals were improved. Another milestone was the discovery of antibiotics during the war, as a result of which many diseases were eradicated nearly completely. Still, bacteria are not only of medical relevance, but extremely important to the cycles of matter on Earth. They play a significant role in the decomposition of all organic materials produced by plants. They oxidize the bound carbon back to carbon dioxide that is then used by the plants to form carbohydrates. Similarly, nitrogen, phosphorus, and other minerals are returned to the soil. Without the activity of microorganisms, life on Earth would die rapidly. The metabolic capacity of bacteria and fungi has been used by man since millennia. Classical bioengineering products are beer, wine, yogurt or cheese. Without bacteria, yeasts, or filament fungi, these products would not have been feasible. Lately, bacteria and fungi are applied in modern engineering, for example for the production of vitamins. The number of chemical products produced with methods of so-called white bioengineering based on microorganisms is expected to increase significantly in the future.