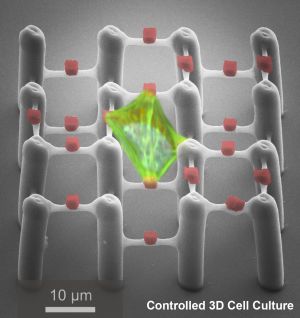 Cell in the two-component polymer scaffold. The photo composition is based on a scanning electron microscopy and laser scanning microscopy. (Image: CFN)

At Karlsruhe Institute of Technology (KIT), researchers of the DFG Center for Functional Nanostructures (CFN) succeeded in specifically cultivating cells on three-dimensional structures. The fascinating thing is that the cells are offered small “holds” in the micrometer range on the scaffold, to which they can adhere. Adhesion is possible to these holds only, not to the remaining structure. For the first time, cell adhesion and, hence, cell shape are influenced precisely in three dimensions. The team headed by Professor Martin Bastmeyer thus has achieved big progress in the field of biomaterial engineering.

So far, several approaches have been used to cell culture in three-dimensional environments which are mostly produced from agarose, collagen fibers or matrigel. They are to simulate the flexible three-dimensional reality in which the cells act normally and, hence, allow for more realistic experiments than those using cell cultures in “two-dimensional Petri dishes”. All approaches used so far have one common feature: They are mostly heterogeneous with random pore sizes. They have hardly been characterized structurally and biochemically.

It was the objective of the group under the direction of Bastmeyer to develop defined three-dimensional growth substrates for the cell culture. The cells are to adhere at certain points only rather than randomly. In this way, parameters, such as the cell shape, cell volume, intercellular force development, or cellular differentiation can be determined systematically as a function of the external geometry of the surroundings. These findings are needed for the later specific larger-scale production of three-dimensional growth environments for tissue cultures required in regenerative medicine, for instance. 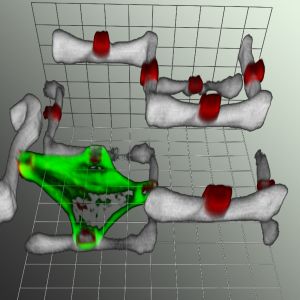 This objective was reached by means of a special polymer scaffold. The scaffold consists of a flexible, protein-repellent polymer with small box-shaped holds made of a protein-binding material. For scaffold construction, the scientists used the Direct Laser Writing Method (DLS) developed by the physicists Professor Martin Wegener and Professor Georg von Freymann at CFN. By means of this process, the protein-repellent structure was fabricated. It consists of 25 µm high pillars that are connected by thin bars at various heights. In a second lithography step, the holds were placed exactly in the middle of the bars. With the help of a solution of adhesion proteins, the proteins only bind to these small holds. Within two hours, individual cells colonize the scaffolds and adhere to the given adhesion points only.

For the first time, the scientists of CFN, Karlsruhe, succeeded in producing suitable materials, in which the growth of individual cells can be controlled and manipulated specifically in three dimensions. This is an important step towards the general understanding of how the natural three-dimensional environment in the tissue influences the behavior of cells.

Background Information
Direct Laser Writing (DLS)
Direct laser writing is a photolithographic process to produce any three-dimensional microstructure. Under the microscope, a photo- resist that is moved across a computer-controlled, piezo-driven table in three dimensions is exposed to femtosecond pulses of a strongly focused laser beam via the objective. In the small area in which the photoresist is hit by the beam, solubility of the material is changed. Depending on the type of photoresist, exposed or unexposed regions are washed off in the development bath. Due to the high optical resolution, direct laser writing can produce structures of 150 nm (1 nanometer = 1 millionth of a millimeter) in objects having a maximum lateral dimension of 0.3 mm and a height of 0.08 mm. The direct laser writing system developed by the Center for Functional Nanostructures is commercialized by the spin-off Nanoscribe GmbH. www.nanoscribe.de

Extracellular Matrix (ECM)
In the connective tissue in particular, the ECM fills the gaps among the cells. It is a mixture of various components, the composition of which depends on the type of tissue. Major components are various types of collagen that provide for strength and elasticity. Fibronectin, laminin or vitronectin serve as proteins for the adhesion of cells. Molecules like hyaluronic acid or chondroitin sulfate provide for the special properties of cartilage. ECM influences the cells via its biochemical composition and mechanical properties.