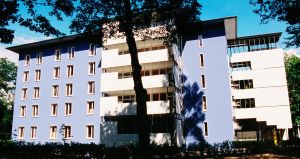 Plus one: Three buildings will be provided with an additional floor each. (Photo: Markus Riecker, KIT)

Inexpensive rooms for students in Karlsruhe are scarce. But now, the Studentenwohnheim e.V. (students home association) of Karlsruhe Institute of Technology plans to extend the Hans Dickmann Compound by 48 new flats. This extension will be funded by the Schroff Foundations with an amount of EUR 500,000. Building will start in summer 2011, the new units are expected to be ready for moving in by the 2012/2013 winter semester at the latest.

An additional floor each will be added to three of the existing Hans Dickman buildings. Extension is planned to be completed in August next year. “In due time before the start of the winter semester; in 2012, we expect a high demand due to the doubling of school graduates,” says Professor Olaf Dössel, Chairman of the Studentenwohnheim e.V. As they supply inexpensive and good flats, the students’ homes of the association are very popular among foreign students. Their proportion presently amounts to 38%. It is one of the objectives of the Schroff Foundations to further support this. “The accommodation of young people from abroad and, hence, the international character of KIT are important to us,” says Ingrid Schroff, Chairwoman of the Foundations and KIT Honorary Senator. “We would like to offer young people, who possibly have little money in their home countries already, good and inexpensive rooms.”

“The KIT Presidential Committee highly appreciates this general support by the Schroff Foundations and in particular the high personal commitment of our Honorary Senator Ingrid Schroff,” says KIT President Horst Hippler, who also chairs the administration council of the Studentenwohnheim e.V. “Students homes play an important role for the education and learning culture at KIT: They are places of the living and learning of students, of cultural and scientific exchange.”

The construction costs amount to a total of EUR 1.8 million. Half a million Euros is given by the Schroff Foundations alone. In addition, the students living in the homes of the Studentenwohnheim e.V. also pay a share for the extension project. “With their rent, they pay EUR 3 as a solidarity payment. In this way, they save capital and invest in future generations of students,” says Olaf Dössel. Furthermore, the foundation for students residences of the honorary senator Hugo Rhein will make available EUR 200,000 as a loan at reduced rates of interest.

About the Schroff Foundations
On the occasion of the 25th anniversary of their group of companies, Gunther and Ingrid Schroff founded the Schroff Foundations in late 1984 on the basis of their private assets. Their objective: Using their entrepreneurial success for scientific and social needs relevant to society. After the death of Gunther Schroff, who had been honorary senator of the former Universität Karlsruhe (TH), Ingrid Schroff continued this commitment. In 2006, the Foundation already supported the first extension of the Hans Dickmann Compound. In addition, she supports innovative areas of education with endowed professorships and international know-how exchange in particular at the KIT Gastdozentenhaus (house of guest lecturers). She also grants awards and scholarships to talented young researchers of KIT.
More information: www.schroff-stiftungen.de

About Studentenwohnheim e.V.
Presently, the association possesses 1216 rooms, 944 of which are located in the Hans Dickmann Compound on Klosterweg, the largest self-administrated students home in Germany. The residents take over organizational tasks, such as the allocation of rooms and the planning of pending renovations. Other, also self-administrated students homes of the association are the Insterburg with 144 rooms, the Hans-Freudenberg Compound with 100 rooms, and the Kolleg am Ring with 34 rooms.
More information: http://www.hadiko.de/verein/wohnheim-ev/