Geophysicists Measure Displacements of the Ground in the Upper Rhine Valley 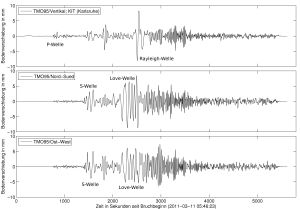 Ground displacements in Karlsruhe after the earthquake in Japan (Figure: Geophysical Institute)

On March 11, at 6.46 hrs German time and 14.46 hrs local time, a severe earthquake occurred 100 km off the coast of the Japanese main island of Honshu. According to preliminary estimations, it had a magnitude of 8.9. This makes it the strongest earthquake in the history of Japan and the sixth strongest earthquake ever measured. At Karlsruhe, the ground was also displaced tempo-rarily by about one centimeter. This is obvious from current measurement data of the Geophysical Institute of KIT.

The Seismology Division studies the depth structure of the central Upper Rhine Valley (TIMO project). The measurement stations are about 10,000 km away from the epicenter of the earthquake in Japan. According to Dr. Jörn Groos from the Geophysical Institute, the quickest seismic wave arrived in Karlsruhe after 12 minutes and 28 seconds. The second quickest followed after about 23 minutes. “The first two earthquake waves are body waves propagating through the interior of the Earth.” After 35 minutes and about 40 minutes, the slower surface waves arrived. However, they caused the strongest ground displacement in the central Upper Rhine Valley.” Within about 100 seconds, the complete city of Karlsruhe was lowered and lifted by 9 mm each and temporarily displaced in north-south direction by 9 mm and in east-west direction by 5 mm.”

Earthquake researchers distinguish various wave types. The first or primary wave (P wave) is a pressure wave that oscillates in propagation direction like sound. The second quickest wave (secondary wave, S wave) is a shear wave that is transverse in nature. Ground displacement is also caused by the surface waves. Love waves displace the ground in horizontal direction (named after the British mathematician A. E. H. Love), Rayleigh waves (named after the British physicist Lord Rayleigh) cause both horizontal and vertical motion.