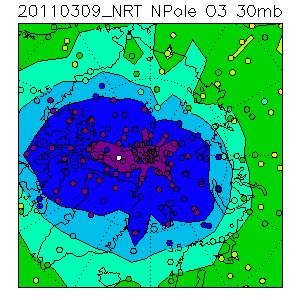 The image of March 09, 2011 shows a strongly reduced ozone concentration in the stratosphere above the Arctic (violet and blue colors correspond to very low ozone concentrations). Ozone decomposition started recently and will be accelerated in the next

Scientists of Karlsruhe Institute of Technology (KIT) expect a record ozone hole of a size that has not yet been observed above the Arctic in the weeks to come. Based on data measured by KIT’s MIPAS on board of the ENVISAT European Environmental Satellite, KIT scientists, together with colleagues from Oxford, observed the start of a phenomenon which so far has only been encountered above the Antarctic.

Satellite measurements and models of this winter show an unusually stable air vortex above the North Pole, which is associated with enormous wind strengths and very cold temperatures. In this Arctic vortex, special chemical processes take place. They cause a very rapid catalytic decomposition of ozone as soon as the first sunlight hits the polar atmosphere. So far, a vortex of comparable size and stability until spring has been observed above the Antarctic only. A relationship to the comparably mild winter and climate change stands to reason, but requires further, more detailed studies.

“Scientists from the KIT Institute of Meteorology and Climate Research (IMK) have been preparing stratospheric balloon measurements on the ESRANGE base at Kiruna (northern Sweden) since early February”, explains Professor Dr. Johannes Orphal, Head of the IMK Atmospheric Trace Gases and Remote Sensing Division. “Due to the extreme winds this year, however, the high-altitude balloons could not start. During the next weeks, these difficult measurements will unveil many exciting details about the very unusual atmosphere above the North Pole this year.” Numerous scientists from Germany, France, Russia, and the Netherlands as well as the French agencies CNES and CNRS are involved in the measurement campaign.

Background
The so-called ozone hole, strong thinning of the ozone layer in the middle atmosphere – the stratosphere – at heights between 10 and 50 km, is an atmospheric phenomenon discovered in the mid-1980s. The largest holes so far occurred above the Antarctic, where a highly stable polar vortex, cold air flow circulating around the South Pole, forms in most years. Within this vortex, very deep temperatures prevail. This is one prerequisite for the formation of the ozone hole. Another prerequisite is the chlorine that is responsible for ozone decomposition by catalytic processes. Due to the use of fluorochlorinated hydrocarbons by man, the chlorine content in the middle atmosphere increased strongly in the second half of the 20th  century and was contained by the 1989 Montreal protocol only.

The low temperatures in the polar vortex cause polar stratospheric clouds (PSC) in the stratosphere. On the crystals of these clouds, chlorine is released from so-called reservoir gases in which it is normally stored in a chemically inactive form. Upon release, chlorine is available in reactive form. As soon as the sun rises after the polar winter, catalytic ozone decomposition starts with the help of UV radiation.

Normally, no stable polar vortex forms above the North Pole, as the flows are disturbed by heterogeneous land distribution. For this reason, temperatures are not sufficiently low for the formation of PSC. Hence, less reactive chlorine exists.

This winter, the situation is different: For the first time, a polar vortex stable over a longer term has developed above the North Pole. As a result, the temperatures are comparable to the Antarctic. PSC and, hence, reactive chlorine are formed. The scientists expect an ozone hole, the dimensions of which might be comparable to that above the Antarctic, even more so, as there are not yet any indications of a collapse of the polar vortex.

It is still unclear whether the stability of the polar vortex this year is caused by coincidence or related to climate change. To answer this question, extensive model calculations will be required.