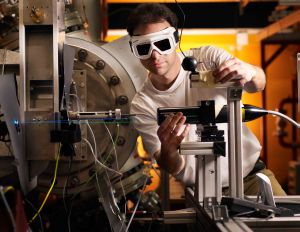 Excellent research and teaching: KIT is in the final round of the Excellence Initiative II with three new proposals. (Photo: Hardy Müller)

Karlsruhe Institute of Technology (KIT) will go into the final round of the Excellence Initiative II with three new and three follow-up proposals. Apart from the follow-up proposals for the DFG Center for Functional Nanostructures, the Karlsruhe School of Optics & Photonics, and the Concept for the Future, KIT will submit full proposals for a new cluster of excellence relating to dependable software and for two graduate schools focusing on informatics engineering and elementary particle and astroparticle physics.

The decision as to which draft proposals took the first hurdle was announced today by the Joint Commission of the German Research Foundation (DFG) and the Council of Science and Humanities in Bonn. According to this decision, KIT has been invited to submit the following full proposals in the final round:

Graduate Schools for the Promotion of Young Scientists:
The “Karlsruhe School of Informatics Engineering” (KSIE) – “Karlsruher Graduiertenschule für Informatik-Ingenieurwesen“ is an initiative of the KIT COMMputation Focus. KSIE pursues a highly interdisciplinary approach. Research of the young scientists will concentrate in particular on the interactions of informatics and other engineering disciplines. Informatics engineering is understood to be the exchange of principles, methods, and modeling approaches by the disciplines involved. Apart from informatics, these are mainly electrical engineering and mechanical engineering, but also economic engineering.

The Graduate School ”Elementary Particle and Astroparticle Physics: Science and Technology“ – ”Elementar- und Astroteilchenphysik: Wissenschaft und Technologie“ is a central component of the KIT Center KCETA. Ph.D. students from various disciplines will jointly work and conduct research on large-scale facilities of elementary particle and astroparticle physics. In this way, the Ph.D. students are integrated in large, international teams worldwide from the very beginning of their work.

Clusters of Excellence for the Promotion of Top Research:
The initiative ”Dependable Software for Critical Infrastructures” (DSCI) – “Verlässliche Software für kritische Infrastrukturen” combines activities of the KIT COMMputation Focus with those of the KIT Energy and Mobility Systems Centers. The research cluster is aimed at developing dependable software for so-called virtualized, i.e. decentralized, self-organized, and adaptable, infrastructures. In complex areas like energy, transport, and electronic data processing this is crucial to minimize errors and failure risks and, hence, to optimize functional systems important to society.

KIT Presidents Professor Horst Hippler and Professor Eberhard Umbach underline: ”KIT considers the competition under the Excellence Initiative II a big incentive. This is also reflected by the high commitment of our scientists and Service Units to the proposals of graduate schools and clusters of excellence submitted so far. It is good that we have now been invited to submit three full proposals – this is a big success for KIT. The decision of the reviewers clearly shows that KIT picks up on research, teaching, and innovation topics of high relevance to the future and that the synergies resulting from the merger have become visible already.“

”This is an important stage victory – now, we will have to fully open up the potential of KIT. This applies to both new and follow-up proposals and in particular to the further development of the Concept for the Future“, says Professor Detlef Löhe, KIT Vice President for Research and Information.

As regards the clusters and graduate schools, KIT has been invited to submit by September 01, 2011 not only the above new proposals, but also follow-up proposals for the DFG Center for Functional Nanostructures (CFN) and the Karlsruhe School of Optics & Photonics (KSOP) that were successful in the first phase of the Excellence Initiative in 2006 already.

The internationally active KSOP (www.ksop.de) is presently offering a Ph.D. program for about 80 Ph.D. students and a master program in the English language with a total of 36 places per year. Apart from work on current interdisciplinary research projects, KSOP among others conveys technical skills and management competencies within the framework of a modular advanced training program. The equally interdisciplinary CFN (www.cfn.kit.edu) conducts fundamental and applied research in various fields of nanotechnology. The focus lies on nanophotonics, nanoelectronics, molecular nanostructures, nanobiology, and nanoenergy.

A special success in the Excellence Initiative I in 2006 was the award of excellence in the third funding line: The Concept for the Future I covered the foundation of KIT. Universität Karlsruhe and Forschungszentrum Karlsruhe, member of the Helmholtz Association, merged into the new legal entity of KIT on October 01, 2009 already. This Concept for the Future will now be further developed in a follow-up proposal by KIT. The Concept for the Future II will further sharpen the profile of KIT and set special priorities, among others in the fields of the promotion of young scientists and gender equality.

Further information can be found at www.dfg.de .