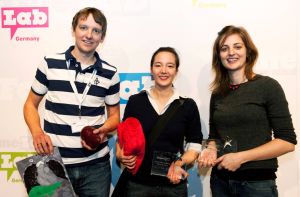 Proved to be talents in communicating science at the FameLab (from left to right): Stefan Suwelack, Isabelle Steinke, Sarah Jarvis. (Photo: Sandra Göttisheim)

Casting of young researchers: On Friday, Karlsruhe looked for the young super scientists in South Germany on the stage of the Baden-Wuerttemberg FameLab. During this competition for science communication organized by Karlsruhe Institute of Technology (KIT) and Stadtmarketing Karlsruhe, more than 250 spectators and four jury members at the sold-out Cultural Center Tollhaus enjoyed creative three-minute presentations and elected the best young scientists for the next round of FameLab.

In first round, the participating pre- and post-doctoral students presented various topics of informatics, natural and engineering sciences, and architecture. From them, the jury chose three candidates for the final.

In the final, Isabelle Steinke was in first place. She is in the first year of a Ph. D. program at the KIT Institute of Meteorology and Climate Research and fascinated the jury and audience with her presentation on aerosol research. In a lively way, she explained “what our research at the Atmospheric Aerosol Research Division has to do with Germany’s next top model” and produced various props, from the prosecco can to a plush heart, from her shoulder bag that appeared to be of magic size. Jury member Rima Dapous from the British Council, who brought FameLab to Germany, about Steinke: “I was fascinated about the seamless transition from the casting show to science, a nice analogy.” Isabelle Steinke participated in the FameLab, because “I want to enthuse other people of my research and look forward to listening the presentations of the other participants. In addition, I think that science needs a platform like the poetry slams for literature. Science tries to explain how things around us work. This is exciting and can also be presented in an entertaining form.”

Sarah Jarvis and Stefan Suwelack ranked second and third at the Baden-Wuerttemberg FameLab, respectively. The Australian Jarvis, who attends her third Ph. D. year at the Freiburg Bernstein Center for Computational Neuroscience, used expressive mimics and gestures to demonstrate to the audience “why nerve cells, these complex little beasts, are no supertransistors.” This aggravates the modeling of constituents of the nervous system by computer simulations, but is essential for man’s survival. Graduate engineer Stefan Suwelack, who attends a Ph. D. program at the KIT Institute of Anthropomatics, used a plastic liver model and Lego Duplo bricks to demonstrate the challenges faced by his research area of “surgical assistance systems” until computer simulation will “reliably guide the surgeon to the liver tumor” thanks to the development of new algorithms.

The criteria of the jury were the contents, understandability, and charisma. Dr. Rima Dapous, Head Competitive Europe of the British Council, Professor Heike Bühler from the Baden-Württemberg Ministry of Science, Research, and the Arts, the deputy chief editor of Geo, Jens Schröder, and KIT Chief Science Officer Professor Volker Saile provided the young scientists with five-minutes’ feedbacks. At the event presented by Sarah Renner from the Southwest German Broadcasting Station, the audience also had a vote: While the jury retired for consultation, they elected their favorite participant by throwing glass chips into ballot boxes.

The participants of the Baden-Wuerttemberg FameLab, who finally ranked in places one and two, will now take part in the national final at Bielefeld on April 9. But not without further preparation: At Berlin, both young scientists will take part in a three-day master class of the British Council, which will offer exclusive communication training. The winners of the German final will then qualify for the international contest at the Cheltenham Science Festival in June, where FameLab took place for the first time in 2005.

The idea of FameLab has meanwhile fascinated people in 17 countries, including Egypt and Vietnam. FameLab Germany is coordinated by the British Council. Partners are the Stifterverband für die Deutsche Wissenschaft (German industry initiative promoting science and learning), Bielefeld Marketing, and the science magazine GEO. In 2011, FameLab came to Germany for the first time. In January and February, qualification rounds were organized at the four cities of Bielefeld, Hamburg, Potsdam, and Karlsruhe. The
FameLab event also convinced Thomas Windmann, Head of the KIT Public Relations and Marketing Service Unit. In his opinion, “it is part of the profession of a modern scientist to explain research contents in a generally understandable and short and sweet manner.” The Head of Stadtmarketing, Norbert Käthler, was “highly pleased about the many spectators in Karlsruhe. This high interest shows how strongly the citizens of Karlsruhe are interested in technology and science.”