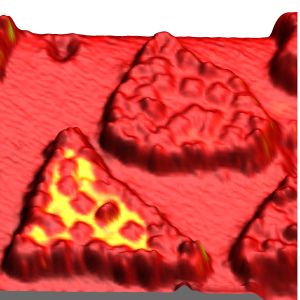 Further development of modern information technology requires computer capacities of increased efficiency at reasonable costs. In the past, integration density of the relevant electronic components was increased constantly. In continuation of this strategy, future components will have to reach the size of individual molecules. Researchers from the KIT Center for Functional Nanostructures (CFN) and IPCMS have now come closer to reaching this target.

For the first time, a team of scientists from KIT and the Institut de Physique et Chimie des Matériaux de Strasbourg (IPCMS) have now succeeded in combining the concepts of spin electronics and molecular electronics in a single component consisting of a single molecule. Components based on this principle have a special potential, as they allow for the production of very small and highly efficient magnetic field sensors for read heads in hard disks or for non-volatile memories in order to further increase reading speed and data density.


Use of organic molecules as electronic components is being investigated extensively at the moment. Miniaturization is associated with the problem of the information being encoded with the help of the charge of the electron (current on or off). However, this requires a relatively high amount of energy. In spin electronics, the information is encoded in the intrinsic rotation of the electron, the spin. The advantage is that the spin is maintained even when switching off current supply, which means that the component can store information without any energy consumption.

The German-French research team has now combined these concepts. The organic molecule H2-phthalocyanin that is also used as blue dye in ball pens exhibits a strong dependence of its resistance, if it is trapped between spin-polarized, i.e. magnetic electrodes. This effect was first observed in purely metal contacts by Albert Fert and Peter Grünberg. It is referred to as giant magnetoresistance and was acknowledged by the Nobel Prize for Physics in 2007.

The giant magnetoresistance effect on single molecules was demonstrated at KIT within the framework of a combined experimental and theoretical project of CFN and a German-French graduate school in cooperation with the IPCMS, Strasbourg. The results of the scientists are now presented in the renowned journal “Nature Nanotechnology”.