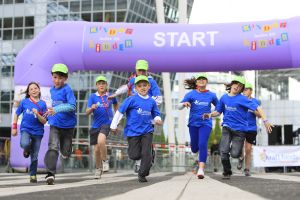 A fund-raising run will take place within the framework of the congress also in 2011. (Photo: Initiative „Kinder laufen für Kinder“)

“Every individual child in its living environment is special!” Under this heading, the successful congress as the fourth of its type will focus on the complete world of life of children, which is symbolized by the six Karlsruhe balls: “Exercise - Playing – Sports”, “Eating – Drinking – Sleeping”, “Family – Friends – Growing up”, “Motivation – Risk – Boredom”, “Cultures – Guest Country Switzerland – Mobility”, and “Day-care Center – Club – School”.

On the three congress days, four main lectures by renowned lecturers, about 140 practical workshops, theoretical working groups and notes, as well as an exhibition with selected exhibitors in the fields of exercise, games, sports, and nutrition will be offered to the about 1000 participants.

A special highlight will be the second fundraising run of the initiative “Kinder laufen für Kinder” (kids run for kids) on Friday in aid of the SOS Children’s Villages. About 1000 children from the Karlsruhe primary schools will take part on February 18, 10.30 hrs, in front of the Audimax of KIT. Apart from Professor Klaus Bös, Head of the KIT Institute of Sports and Sports Science and Chairman of the Board of the Research Center for School Sports and Sports of Children and Adolescents (FoSS), the patron of the run, Katrin Schütz (member of state parliament), will join the kids. With the patron of the congress, Thomas Dold, who will join the children in running backwards, the European long jump champion, Christian Reif, who also supports the congress, and players of BG Karlsruhe, prominent sportsmen will take part as well.

For the first time, FoSS is especially pleased to present a guest country of the congress. Professor Bös: “Together with our guests from Switzerland, would like to draw the public’s attention to the differences and common features of movement culture(s). In both countries, great value is attached to raising forward-thinking children. The presentations and workshops of the guests from Switzerland do not only enrich the program, we are also very much interested in the Swiss equivalent of children’s gymnastics, Swiss wrestling.” Swiss wrestling is considered a national sport of Switzerland. During the congress opening celebration, it will be presented by Swiss children on sawdust according to tradition.

The organizers wish that the congress participants are given many ideas for their work on and with children. Apart from practical suggestions, also current scientific findings will be of importance. Know-how transfer will be ideal, as the congress will be preceded by the meeting of the health commission of the German Association for Sports Science (dvs) also on the KIT Campus. “Health research for children is gaining importance in sports science,” underlines Professor Alexander Woll from the University of Constance. “The last two days have demonstrated that current scientific findings should be transferred to practice as rapidly as possible!”

The congress is organized by KIT, the Research Center for School Sports and Sports of Children and Adolescents (FoSS), the University of Constance, the Baden Gymnastics Association, and the health insurance company AOK Baden-Württemberg. The latter’s chairman of the Executive Board, Dr. Rolf Hoberg, explains: “We consider it very important that children develop interest and pleasure in having a healthy lifestyle. Through events like the present congress and projects to take part in like TigerKids or ScienceKids, positive stimuli are given for increased body awareness and healthier life. But we also appeal to the parents to permanently support their children in having an active leisure time.”

The Baden-Württemberg Children’s Gymnastics Foundation supports the congress. Senator Thomas Renner, Chairman of the Foundation Council, proposes to bundle the various initiatives in Baden-Württemberg and announces a joint congress in 2012. His suggestion to Minister-President Stefan Mappus is to establish an integrated, state-wide network until the 60th state anniversary and to support the state in becoming children-compatible: “For all children to grow up healthy, integrated, and socially strengthened.” Gerhard Mengesdorf, President of the Baden Gymnastics Association, underlines the importance of the Baden-Württemberg Children’s Gymnastics Foundation: “The Foundation does not only support the physical development of children at this congress, but also in very many other fields. Municipalities and sports clubs profit from this commitment that is unique in Germany.”

The congress will take place under the auspices of the Baden-Württemberg Minister-President Stefan Mappus. The event of three days’ duration will be supported by the Manfred Lautenschläger Foundation and EnBW Energie Baden-Württemberg AG.