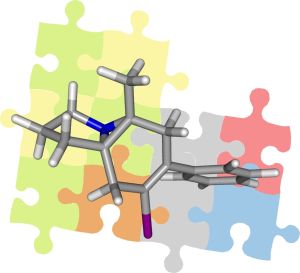 Chemists at the Karlsruhe Institute of Technology (KIT) and the Technische Universitaet Muenchen (TUM) introduced a new method for identifying chemical compounds. The approach they used is an improvement on nuclear magnetic resonance (NMR) measurements – for decades one of the most successful methods for determining the chemical structure of organic molecules. The results now published in the scientific journal "Angewandte Chemie" show a sophisticated approach to structural data when classical methods of analysis fail.

The team of Professor Burkhard Luy from KIT and Junior Professor Stefan F. Kirsch from the TUM has now shown for the first time that certain NMR parameters, the so-called residual dipolar couplings (RDCs), can make a significant contribution towards determining the constitution of chemical compounds when traditional methods fail. To do this they embedded molecules of the compound in a gel which slightly constricts their mobility. By stretching the gel, the molecules can be aligned along a preferred orientation. While residual dipolar couplings average out in solution, they become measurable in such partially aligned samples and provide valuable structural information that can be used to build a model of the molecule.

To test this new approach to chemical structure determination the scientists examined a molecule whose atomic composition was known, but not the precise connectivities of the individual atoms in the molecule. The molecule was obtained using a unique reaction, so there were no precedents for its structure. Classical methods of analysis failed because of the compactness of the molecule. In this particular case it was only possible to determine the structure by means of residual dipolar couplings, so that the newly acquired knowledge could be used to draw conclusions about the formation of the molecule – something that in the past could only be speculated about.

“This type of analysis will not be suitable for all structures in the future,” said scientists Luy and Kirsch. “There will still be molecules whose structures will defy all attempts at unraveling, in spite of tremendous efforts and cutting-edge technologies. But this new method provides us with one further tool to help us unravel the structural mysteries of nature.”

This research was funded through the German Research Foundation DFG (Heisenberg Program, Research Group FOR 934) and the Chemical Industry Fund. The scientists conducted their measurements on equipment from the Bavarian NMR Center.