Using Synchrotron Radiation, a German-French Research Team Has Obtained Hints Regarding the Genealogical Tree of Snakes 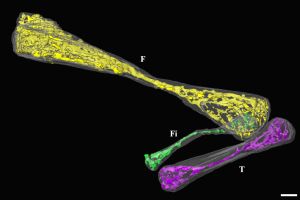 False color photography of the second leg of the extinct snake Eupodophis descouensi in a 95-million-year-old fossil. (Photo: ESRF)

Using a new X-ray technology, a research group has obtained hints as to how snakes lost their limbs in the course of evolution. With this, the scientists hope to further a debate among paleontologists: Do today’s snakes descend from ancient reptiles that lived on land or from marine animals? The detailed, three-dimensional X-ray images of the remains of a leg of an extinct snake reveal an inner architecture that is similar to that of today’s lizards. The results will be published in the Journal of Vertebrate Paleontology dated February 08.

The research project was directed by Alexandra Houssaye from the Muséum National d'Histoire Naturelle (MNHN), Paris (France). In addition, scientists from the European Synchrotron Radiation Facility (ESRF), Grenoble (France), where the X-ray images were taken, and from Karlsruhe Institute of Technology (KIT), where the recording technique and the corresponding instrument were developed, are involved.

Only three snake fossils with preserved leg bones are known worldwide. During this experiment, an Eupodophis descouensi was studied. Its 95-million-year-old petrified remains were discovered in Lebanon ten years ago. The about 50 cm long snake has a small, 2 cm long leg in the pelvis area. This detail makes the fossil a key to understanding snake evolution, as it represents an intermediate phase, during which these snakes had not yet completely lost their legs inherited from the lizards. As only one leg is visible at the surface of the fossil, a second, hidden leg was expected to be hidden within the stone plate. It was detected by synchrotron radiation and imaged in all detail.

"Discovery of the inner structure of the hind limbs of Eupodophis now allows to investigate the process of regression of the limbs in snake evolution,” comments Alexandra Houssaye.

For the experiment, the researchers used synchrotron laminography. “This new technique was developed in particular for the investigation of larger, flat objects,” explains Lukas Helfen, who is delegated from the Institute for Synchrotron Radiation of Karlsruhe Institute of Technology to ESRF in order to equip and operate a beamline with this technology. “Synchrotron laminography resembles computer tomography (CT) that is used at many hospitals, but allows for a resolution in the micrometer range. This is a thousand times better than the resolution of a classical CT device.” During laminography, the fossil is rotated at an oblique angle to an intensive, high-energy X-ray beam, with thousands of two-dimensional images being recorded during the rotation from 0° to 360°. From these individual images, a highly resolved, three-dimensional model is calculated, which also discloses hidden details, such as the inner structure of the legs.

“Large synchrotrons can unveil microscopic details in fossils that remain hidden to other techniques. Moreover, synchrotrons can study these valuable objects in a non-destructive manner,” adds Paul Tafforeau from ESRF, one of the co-authors of the study.