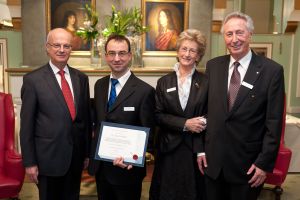 Professor Jürg Leuthold from KIT is one of this year’s winners of the Hector Research Award and now belongs to the group of so-called Hector Fellows. This year, three excellent scientists from excellent German universities were granted the Hector Research Award in the amount of EUR 150,000 each. Apart from Leuthold, these are Professor Stephen Hashmi (University of Heidelberg) and Professor Jens Timmer (University of Freiburg). With its award, the Hector Foundation II with its office at Weinheim acknowledges both pioneer research achievements of the scientists as well as their attitudes as university teachers.

The physicist Leuthold, who has been doing research and teaching at KIT since 2004, is an expert in the field of high-speed data transmission. Recently, he developed an optical method with his group, by means of which the largest amount of data ever encoded on a single laser beam of 10 terabits per second can be encoded and decoded in real time. Three years ago, Leuthold succeeded in building one of the most rapid optical silicon chips. It is four times quicker than the chips available at that time and fifty times smaller than the chips used in today’s telecommunication devices. The Swiss-born Leuthold heads the KIT Institutes of Photonics and Quantum Electronics (IPQ) and Microstructure Technology (IMT).

During the ceremony at Heidelberg on February 4, Dr. h.c. Hans-Werner Hector prized the fascinating work of the laureates: “Your fields of research give rise to the miracle of everyday life.” According to Hector, the foundation is pleased to make available funds to promote the best professors. He considers this the logical continuation of the support of highly talented pupils and students, which is also accomplished by the foundation. “Both together make up a reasonable entity,” said Hector.

“Appointment of Leuthold to a Hector Fellow is a big honor for KIT,” underlined KIT President Professor Horst Hippler. “We are very pleased that this year a scientist from KIT was granted the Hector Research Award for excellent research and teaching again.”

Leuthold now belongs to the group of so-called Hector Fellows, a team of specialists working jointly on scientific topics. By granting the annual award since 2009, the donors Josefine and Hans-Werner Hector wish to enhance mutual support of the laureates and to give people an understanding of natural science. Networking of the fellows gives rise to a “round table of top scientists” that now has nine members. Apart from the three laureates of this year, the professors Manfred Kappes (KIT), Franz Nestmann (KIT), Doris Wedlich (KIT), Peter Gumbsch (KIT), Martin Wegener (KIT), and Thomas Elbert (University of Constance) are Hector Fellows.