In 2010, About 200,000 People Died Due to Earthquakes Worldwide – KIT Researcher Submits Global Damage Report and Analyzes the Reasons 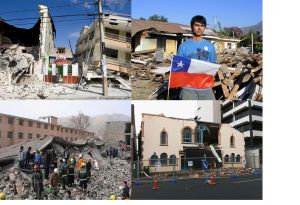 Catastrophes and their consequences: Earthquakes in 2010. (Photos: CEDIM)

In 2010, earthquakes caused enormous damage worldwide. The horrible figures: About 200,000 fatal casualties, nearly three million homeless people, and more than 50 billion US dollars of losses. A detailed analysis of the catastrophes and the reasons of their variable impacts has now been submitted by James Daniell from the Center for Disaster Management and Risk Reduction Technology (CEDIM) of Karlsruhe Institute of Technology (KIT).

Daniell’s report on global earthquakes in 2010 is based on the CATDAT database that has been established systematically by the scientist since 2003. It considers online archives, reports of institutions, publications in books and journals, as well as other data collections worldwide. His work is funded by a grant of the General Sir John Monash Foundation in Australia.

At least 91 earthquakes occurred last year, during which people died, were injured or became homeless or during which considerable damage was caused. 33 countries were affected. Most frequently, 13 times, the earth quaked in China, 10 times in Iran.

Daniell analyzes the conditions in the countries affected and can explain why the disasters have highly variable impacts. The earthquake in Haiti that reached level 7 of the moment magnitude scale (Mw) had the most devastating effects: It caused up to 225,000 fatal casualties. Between 1 and 2.1 million people lost their homes. The earthquake in Chile reached level 8.8 Mw. About 800,000 people lost their homes, but only 600 died, far less than in Haiti. The reason: With Haiti, the earthquake hit one of the least developed countries in the world. More than 70% of the people in Haiti possess less than 2 dollars per day and, hence, live below the poverty level. Plans for protection against earthquakes hardly exist, most houses are constructed very simply. In Chile, by contrast, stable buildings prevented a far higher number of casualties. Here, where about 2% of the population live below the poverty level, the impacts of the earthquake were less severe, although the amount of losses of 30 billion US dollars by far exceeded the amount of damage in Haiti (8 billion US dollars). This sum corresponds to more than 100% of the nominal gross domestic product of Haiti, which is why this disaster is among the ten most devastating earthquakes since 1900.

Daniell concludes: “Socioeconomic vulnerability of the country has to be taken into account in risk assessment.” Daniell’s data confirm that higher developed countries have more comprehensive construction regulations, conduct better research into earthquake risks and effects, have a more reliable way of constructing buildings, and take more extensive measures to reduce the risks. ”And they prepare better for disaster management.”