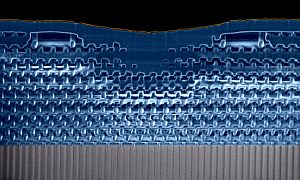 In the electron microscope, the optical cloak of invisibility can be seen below the curvature in the gold film (yellow-red). (Colored SEM image; source: CFN)

Who does not want to disappear under a cloak of invisibility sometimes? This usual habit of Harry Potter or Siegfried of the Nibelungs was considered to be impossible in the real world. Some years ago, the theory of transformation optics opened a way on paper at least. Experimentally , however, structures produced so far for optical wavelengths have only been effective in two dimensions. Now, scientists of the Karlsruhe Institute of Technology (KIT) and the Imperial College, London, present an optical cloak of invisibility for three-dimensional objects in the renowned Science journal (Science Express Reports, DOI 10.1126/science.1186351).

Actually, the object that is apparently made invisible by Professor Martin Wegener and his working group at the DFG Center for Functional Nanostructures (CFN) of KIT is just a small bump of a thousandth of a millimeter (a micrometer) in height in a thin gold film. “Still, the result is a big progress,” underlines the physicist. “So far, cloaks of invisibility have been based on waveguides that are practically two-dimensional. But if you look onto the structure from the third dimension, the effect is gone.”

The breakthrough is achieved by a process developed by CFN scientists over a few years only. With a so-called Direct Laser Writer, a computer-controlled focused laser beam writes into a photoresist in all three spatial directions as if it was a pen. “In this way, we produce 3D structures with optical properties that do not exist in nature”, explains Wegener’s co-worker Tolga Ergin. These structures, called metamaterials, look like stacks of wood. Near the small bump a region is created in which the refraction index changes constantly for electromagnetic waves of optical frequencies. As a result, light waves that would normally be reflected laterally by the curved object are influenced and deflected such that a steady light signal is recorded only. “We see a plane surface without a bump”, says Dr. Nicolas Stenger, co-author of the publication. “The physics behind it, however, is rather complex. The mathematical methods for the calculation resemble those used for Einstein’s theory of relativity.”

The measurement itself is accomplished in an experimental setup similar to an ordinary optical microscope. The optical cloak of invisibility works even better than expected by the scientists, as the effect is visible over a broad wavelength spectrum from 1.5 to 2.6 µm. “This is not the range of visible light”, concedes Wegener. “These wavelengths in the near infrared, however, are relevant to telecommunication.”

By means of their direct laser writing technique, the scientists could in principle also produce metamaterials to make people disappear. “But production would take an extremely long time”, says Wegener with a wink in his eyes. He prefers to use the optical cloaks of invisibility as an experimental tool to study transformation optics. They may give impulses for the development of complex components for optics and photonics.

Transformation Optics
According to the theory of transformation optics developed in the past years, any desired transformation of space-time can be mapped with mathematical accuracy onto an imaginary material, whose optical properties vary spatially in a certain way. To realize an optical cloak of invisibility, for example, a point in space can be expanded to a finite volume in which any kind of object could be hidden. The mathematical rules of transformation optics are based on the general theory of relativity. The experimentally produced structure, a “carpet cloak of invisibility”, was presented theoretically in 2008 by Jensen Li and John Pendry.

Direct Laser Writing
Direct Laser Writing is a photo-lithographic method to produce arbitrary three-dimensional microstructures. In an optical  microscope setup the photoresist is moved in all three dimensions by a computer-controlled, piezo-driven table. It is exposed to femtosecond pulses from a strongly focused laser beam through the objective lens. In a small confined area the solubility of the photoresist is changed by the energy of the laser pulse. Depending on the type of photoresist, the irradiated or non-irradiated regions are washed out in the development bath. Due to the high optical resolution, direct laser writing can be used to produce structures with a resolution of 150 nm (1 nm = 1 millionth of a millimeter) in objects with a maximum lateral dimension of 0.3 mm and a height of 0.08 mm. The direct laser writing system developed by the Center for Functional Nanostructures is meanwhile commercialized by the spin-off company Nanoscribe GmbH. www.nanoscribe.de

Metamaterials
Metamaterials are artificially produced structures that behave like a homogeneous material and possess properties that do not exist in nature. They consist of homogeneous, regularly arranged elements that interact with electromagnetic waves, although they are far larger than atoms in a crystal. Nanotechnologically produced metamaterials  consist of units small enough to influence electromagnetic waves with wavelengths from the visible to the infrared range.