A Laureate in the Anniversary Year 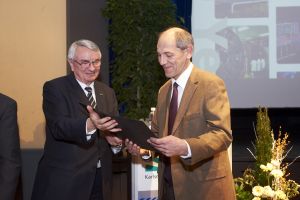 On December 14, 2010, the KIT Center for Elementary Particle and Astroparticle Physics (KCETA) of Karlsruhe Institute of Technology (KIT) celebrated the 50th anniversary of research and education in the field of experimental and theoretical nuclear and elementary particle physics in Karlsruhe. During this event, Professor Dr. Valery Rubakov from the Russian Academy of Sciences was presented the Julius Wess Award.

Professor Dr. Valery Rubakov, this year’s laureate of the Julius Wess Award, is one of the internationally most renowned theoretical physicists in the fields of quantum field theory, elementary particle physics, and cosmology and member of the Russian Academy of Sciences. His publications cover fundamental contributions to cosmology, non-perturbative quantum field theory, baryon asymmetry in the universe, and on theories with extra dimensions. In all these fields, he has made trend-setting discoveries and formulated theoretical concepts. The 2010 Julius Wess Award was handed over to Rubakov during a celebration of the 50th anniversary of nuclear and elementary particle physics in Karlsruhe on December 14, 2010 at Karlsruhe Institute of Technology (KIT).

History of Nuclear and Elementary Particle Physics in Karlsruhe

With the appointment of professors Herwig Schopper (Experimental Nuclear and Particle Physics) and Gerhard Höhler (Theoretical Nuclear and Particle Physics) in 1960, research and education in these fields started at the former Technical University of Karlsruhe and the former Karlsruhe Nuclear Research Center. In the course of the years, these activities were extended and strengthened constantly to cover the current nine main scientific topics of elementary particle physics, astroparticle physics, and cosmology. Here, questions relating to the origin, development, and state of the universe and processes taking place in it are answered. Presently, research and education are being conducted by four institutes forming the core of the KIT Center for Elementary Particle and Astroparticle Physics (KCETA). Apart from the coordination of research and education, KCETA is conceiving strategies for future developments. The Center’s institutes are located on both KIT campuses and comprise 12 professors and more than 300 scientific and technical employees.

The institutes closely cooperate with renowned research institutions and scientists worldwide and participate in large international proj-ects at the KIT, CERN (Geneva), Fermilab (Chicago), KEK (Tsukuba, Japan), at Malargüe (Argentina) and on the ISS space station. In addition, a number of bi- or multilateral cooperative ventures are being pursued. Excellent international evaluations on behalf of the different funding partners, such as the Federal Republic of Germany, the state of Baden-Wuerttemberg, the German Research Foundation or the Helmholtz Association confirm the high level of research and education of KCETA.

The Julius Wess Award commemorates Professor Dr. Julius Wess who spent 20 years at the Karlsruhe Institute of Technology working tirelessly in the field of theoretical and experimental elementary particle physics and published numerous internationally highly acknowledged articles in this field. Field theory terms, such as the Wess-Zumino effect or the formulation of the first supersymmetric quantum field theory, the Wess-Zumino model, will always remain associated with this name.

Annually, this research award is granted to elementary particle or astroparticle physicists for excellent experimental or theoretical scientific achievements enhancing and deepening our understanding of the fundamental laws of nature. When opening the KIT Center in November 2008, the award was first granted to the Nobel Prize laureate Professor Dr. Frank Wilczek who had appreciated the importance of Julius Wess to the theory of elementary particles at a large international conference on supersymmetry in Karlsruhe in summer 2007 already.