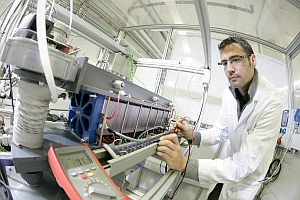 Karlsruhe Institute of Technology (KIT) will submit four new pro-posals of graduate schools and excellence clusters each for the Excellence Initiative II. The deadline for submission of the new proposal sketches will be tomorrow, September 01. In the first round of the Excellence Initiative in 2006, the former Universität Karlsruhe (TH) succeeded in all three funding lines. As a Concept for the Future, it proposed the foundation of KIT together with Forschungszentrum Karlsruhe, which has meanwhile been implemented successfully. With its new proposals, KIT intends to further enhance its strengths.

“We have drawn up the new proposals along the portfolio of KIT with its centers, focuses, and multi-disciplinary topics in materials and computer sciences, for instance” says Professor Detlef Löhe, KIT Vice President for Research and Information. KIT enters the current competition with seven new own proposals and a proposal drawn up in cooperation with other universities.

Successful acquisition of funds for at least one graduate school and one excellent cluster will be required for KIT to be permitted to submit a follow-up proposal for the Concept for the Future. In the next months, the sketches submitted will be evaluated. In case of a positive result, KIT will be asked to submit full proposals. These proposals and the follow-up proposals for the Concept for the Future and the existing KSOP graduate school and CFN excellence cluster will have to be submitted by September 01, 2011. “The Concept for the Future II on which we are working at the moment will focus on utilizing the potentials of KIT after the merger,” underlines Vice President Löhe.

Thanks to KIT’s status as a state university, both KIT sectors can take part in the Excellence Initiative. The proposals are drawn up jointly by scientists from the large-scale research sector and the university sector of KIT. Work is coordinated by Dr. Irmgard Langbein and Dr. Dennis Nitsche from the Excellence Initiative II project management office. They are supported by the KIT Research Office. “Quite a few sabbaticals have been spent for formulating the proposals,” emphasizes KIT Vice President Löhe,” close cooperation of the scientists from Campus North and Campus South of KIT will inure to the benefit of the proposals.”

In the 2006 Excellence Initiative I, the former Universität Karlsruhe was one of three universities winning in all three funding lines. Proposals for the graduate school of Karlsruhe School of Optics and Photonics (KSOP) and the excellence cluster of Center for Functional Nanostructures (CFN) were approved of. The decisive success was reached in the third funding line, the Concept for the Future, with the proposed foundation of KIT.