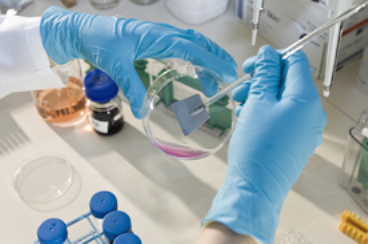 Cell harvest: Cultivated cells are scraped off the bottom of a nutrient dish for studying their tumor control.
Photo by: Forschungszentrum Karlsruhe

The protein p53 is deemed one of the most important protection factors used by the body to prevent own cells from degenerating. Hence, regulation of p53 is studied extensively. Damage of the genetic substance can lead to cancer. If such DNA damage occurs due to e.g. external impacts, such as radioactive radiation, or accidental errors in the composition of the genetic substance, decomposition of p53 is prevented and, thus, its concentration is increased automatically. Via a multi-stage biochemical signal chain, the nucleus is then given the information to stop the reproduction of genetic substance. As a consequence, the cells affected do no longer divide and die. “As soon as we will understand how p53 regulates cell death, we will also be able to prevent the growth of tumors via this route”, says Dr. Christine Blattner from the ITG. So far, scientists have considered the enzyme ATM-kinase to be one of the initiative elements in the signal chain. In own experiments, however, Blattner’s team disproved this explanation model. For their studies, the ITG scientists chose human cell lines lacking the enzyme ATM-kinase due to a genetic defect and analyzed the behavior of p53 upon irradiation of the cells. The scientists found that the concentration of p53 also increases in these cells after irradiation. In subsequent studies, the scientists identified which factors really regulate p53. “This mechanism is of particular interest to cancer treatment”, explains Christine Blattner, “as both irradiations and some chemotherapeutical agents may cause DNA damage and, thus, trigger secondary tumors.” In tumor cells, p53 is often defective. In cancer cells with intact p53, however, specific increase in this protection factor may be a promising approach in the future to killing degenerated tissue without damaging healthy cells.

The results of this study have been published in No. 22 of the Proceedings of the National Academy of Sciences.