Biomechanics from the Karlsruhe Institute of Technology Mitigate Damage of Components 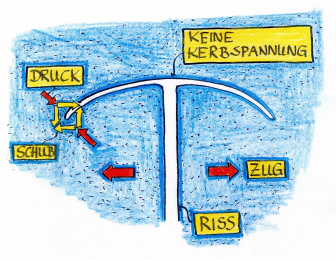 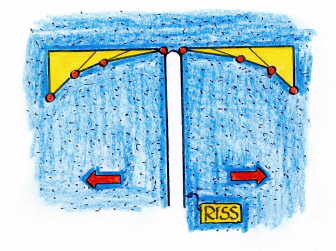 Failure of a component may result in serious damage to property or injuries. Often, failure is caused by cracks. Biomechanics from the Karlsruhe Institute of Technology have developed a novel failure barrier that allows for a controlled further operation of the damaged component. Compared to previously applied methods, further period of use until replacement of the component is extended by a factor of 35.

Failure of a mechanically loaded component may result in damage to property and injuries. In many cases, failure is caused by cracks. To further operate a component with cracks until replacement, the crack tips were frequently drilled away in the past. A round hole was considered to be less dangerous than a sharp crack tip. However, new cracks formed at the stress peaks of the round hole, which again were removed by drilling. Thus, the component was increasingly weakened.

The Biomechanics Department of the Institute for Materials Research II of the Karlsruhe Institute of Technology (KIT) has developed a new crack therapy: At the tip of the crack caused by the load, a so-called artificial “Aikido crack” is applied vertically. Aikido refers to the principle of deflecting the force of an opponent’s “attack”. The cracks are deflected, such that the crack tips run into compression zones. There, the crack tips are compressed and, thus, stopped. To prevent the new crack contour from initiating secondary cracks, it is shape-optimized according to nature. It was found in fatigue tests that this treatment of cracks extends the service life of the components by a factor of 35 compared to the treatment with conventional methods. Calculations with the help of finite elements confirm the drastic reduction of stress peaks.

“Whoever does not trust the zipper of his trousers, will tighten his belt”, explains Professor Dr. Claus Mattheck, head of the Biomechanics Department of the KIT. “In this way, dangerous transverse stresses are reduced intuitively.”

This new crack therapy is another element of Mattheck’s popular mechanics for damage prevention: By means of simple and reproducible methods modeled after nature, components can be constructed more easily and have a far longer service life with the same amount of material used. 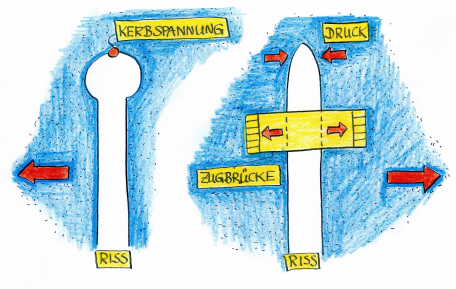 ((Captions: Kerbspannung = Notch stress; Riss = Crack; Druck = Compression; Zugbrücke = Tension bridge))
Cracks removed by drilling still have notch stresses in the borehole, from which new cracks may start. Welded-on tension bridges put the crack tip under pressure, but have to have optimized connections. Otherwise, they may tear.
Photo by: Forschungszentrum Karlsruhe

The deformation behavior of a sponge rubber plate with an internal crack demonstrates the effect of the ”Aikido crack“.
Photo by: Forschungszentrum Karlsruhe