From the Idea to the Solution: Live! 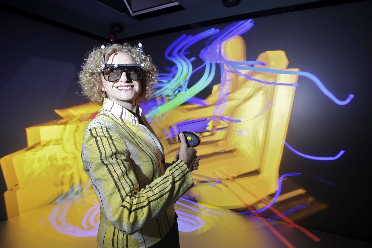 LESC means Lifecycle Engineering Solutions Center. Today, the LESC will be opened officially. The newly founded center of the Karlsruhe Institute of Technology (KIT) uses modern virtualization technologies to make engineering work even more fascinating and perceptible for broad target groups. The LESC has the vision to overcome the obstacle between ideas and their implementation.

“It is a major challenge today to perceive properties and functions of future products at an early point of time and closely to reality in order to generate benefits for enterprises and customers”, says Professor Jivka Ovtcharova, founder of the LESC and Head of the Institute of Information Management in Engineering of the Universität Karlsruhe. “The LESC will accompany the generation of innovative solutions from the first idea to maturity.” Virtualization rapidly visualizes ideas closely to reality and, hence, represents an excellent tool in the planning, development, and validation of products and processes. According to Ovtcharova, this new technology of the LESC will be of interest not only to engineers, but also to architects, physicians, and many other branches.

Conventional methods to generate digital product models provide three-dimensional views, but man in front of the screen always remains separated from the object of his interest. The key element of the LESC is immersive representation: “Man is in the center of what is going on and, hence, an active co-designer, who also experiences all interactions”, says Ovtcharova. The LESC uses modern projection technology for virtual and extended reality, which is highly flexible and scalable in application. The KIT will increasingly use this new center for joint research projects.

As pointed out by the President of the Universität, Professor Horst Hippler, the LESC will be of very high value to the KIT. “This new center in a promising field will excellently complement the competence portfolio of the KIT.” The LESC will also meet with the needs of industry. Among the guest speakers at the opening ceremony will be Willy Suter, Vice President Discrete Manufacturing HP, Dr. Hellmuth Ludwig, President of the Siemens PLM Software Inc., and Klaus Straub, Head of the Organization and Information Management Department of the Audi AG.

According to the LESC founder Jivka Ovtcharova, this viable technology originates from the triad of science, art, and technology during Renaissance and in particular to the person of Leonardo da Vinci. As a scientist, artist, and inventor, he covered the complete path from the first idea to a piece of art to its innovative implementation. Man always was in the center of this triad. According to Ovtcharova, Leonardo da Vinci was a visionary in due time, but had to distressfully experience that many of his inventions could not be implemented, as it was not possible to reach the right persons at the right place in the right time. The engineer who might have put Leonardo’s ideas into practice could not be won for an invention, as he simply could not be informed “just in time”. It is the defined objective of the LESC to overcome this obstacle between idea and implementation with the help of the new spatial representation.

Establishment of the center was sponsored by: HP, Siemens PLM Software Inc.