A Grid Spans the World

The Grid Computing Center Karlsruhe Is the Main Node for Large-scale Physical Experiments: From Autumn, Enormous Amounts of Data Will Be Stored on KIT Computers – Visit of the Designated General Director of CERN 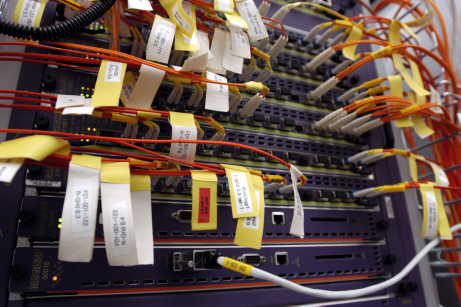 Ready for the large-scale experiment at CERN in Geneva: Computers at GridKa.
(Photo by: Forschungszentrum Karlsruhe)

For a large-scale experiment at the European research center CERN, scientists have spanned a worldwide grid that links enormous amounts of data and makes them rapidly available. A main node is the Grid Computing Center Karlsruhe (GridKa) at the Steinbuch Centre for Computing (SCC), the joint computing center of the Forschungszentrum and the Universität Karlsruhe. Researchers will now try out what everyone will be able to do in the future: Using data and computing capacities like electricity from the plug or water from the tap.

All over the world, about 8000 high-energy and elementary particle physicists are involved in the experiment. Using gigantic particle accelerators, they try to model the state of matter that existed a billionth of a second after the Big Bang. The largest plant of this type in the world, the large hadron collider (LHC), is located at the European research center CERN in Geneva in a circular tunnel of 28 km length. In autumn, this plant will supply the first measurement data.

In the accelerator, particles are accelerated to nearly the speed of light – some in clockwise direction, others in anticlockwise direction: “When colliding, they burst”, explains Klaus Peter Mickel, Technico-Scientific Director of the SCC. This results in millions of particles that are measured by the CERN researchers using detectors having the size of office buildings and a weight of up to 12,000 tons. The trajectories of these particles are recorded. This may give rise to several gigabytes of data per second, which will have to be registered and evaluated later on: “Per year, 16 petabytes of data occur”, underlines Mickel. A petabyte corresponds to a quadrillion bytes – an amount of data that may be stored on about 1.4 million CDs. Enormous computing capacities are required: “For the LHC experiment, a need for about 100,000 PCs was calculated”, says Mickel.

GridKa is a major part of the worldwide distributed grid computing infrastructure to evaluate the LHC measurement data. In 2002, Karlsruhe was elected to host the German grid center – other main nodes are located among others in Taiwan and the USA. They link 120 smaller centers to which 1000 even smaller centers are assigned. The PCs of the 8000 scientists involved are connected to them. Tests have been run for four years now. Meanwhile, more than 1400 computers, hard disks, and tapes with a total capacity of four petabytes each have been made available at the SCC. 26 persons operate the plant. The last large-scale test was performed successfully in May – “with more data than arising during production”, as assured by Mickel. The amount invested by the Federal Ministry of Education and Research (BMBF) and the SCC in hardware totals EUR 18 million. Updating of the computers will cost another four millions per year. On September 10, the first particles will collide at CERN. The experiment is planned to have a duration of at least twenty years.

The significance of GridKa for the CERN experiment will be explained by Professor Rolf-Dieter Heuer, designated general director of CERN, on Tuesday, September 9, at the Tulla-Hörsaal (Englerstraße 11, building No. 11.40). His presentation entitled “The Large Hadron Collider: Shedding Light on the Dark Universe” will be held in the English language. The event will be open to the public, start at 18.45 hrs, and end at 20 hrs with a reception in the entrance hall. It will be the highlight of the International GridKa School on Grid Computing and e-Science that will take place from September 8 to 12 at the SCC. About 125 scientists and students from 12 nations will exchange information in presentations, exercises, and workshops.

Representatives of the media may inform themselves in more detail about elementary particle physics, GridKa, the LHC, large-scale research, and science policy at a press conference on Tuesday, September 9, 17.30 hrs, in room No. 231 of the building (Englerstraße 11, building No. 11.40). Questions will be answered by Professor Peter Mättig, Chairman of the Committee for Elementary Particle Physics, Klaus Peter Mickel, Professor Eberhard Umbach, Chairman of the KIT Executive Board, Dr. Beatrix Vierkorn-Rudolph from the BMBF and member of the CERN council, and Professor Heuer.