KIT Engineers Cooperate with Partners from Industry and Science to Develop Modern Methods for Locating Rail Vehicles. This May Double the Capacity of Railtrack Systems in the Future. 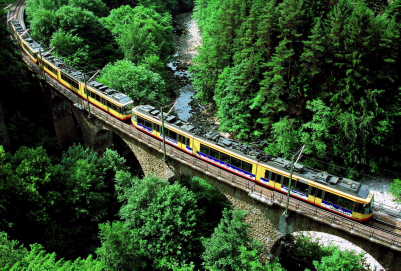 Precise locating under difficult conditions:
KIT scientists tested the new locating systems with railcars from the AVG.
(Photo by: KVV)

Passenger and above all goods traffic on railways is growing significantly. Consequently, a number of train connections reach their limits of capacity today already. For this reason, KIT scientists are cooperating with institutions from science and industry to develop extremely precise, autonomous onboard locating systems that are supposed to significantly increase the capacity of the existing railtrack systems. The DemoOrt project funded by the Federal Ministry of Economy and Technology with a total of EUR 3.75 million has now been presented for the first time at a meeting in Karlsruhe.

The new system, the development of which is coordinated by the German Aerospace Center DLR, combines two modern locating technologies that are installed directly in the railcar, namely, eddy-current sensors developed by the KIT and a satellite locating unit supplied by the Technical University of Braunschweig. The eddy-current sensor induces electrical currents into the railtrack, which are received again as a magnetic field. In this way, the device installed in the undercarriage of the train does not only determine the speed exactly, but also recognizes the specific pattern of track switches and check rails. By comparing the data obtained with the digital map material, the position of the train can be determined unambiguously. The eddy-current sensor is applied above all when the GPS system cannot establish a satellite connection under certain geographical or climatic conditions – in tunnels, canyons or under snow, ice or a thick cloud layer. 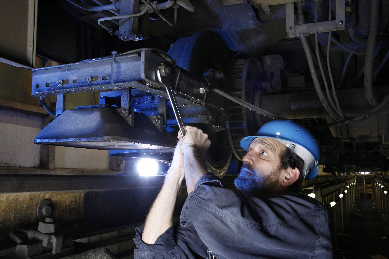 The eddy-current sensor is installed in the undercarriage of a railcar.
(Photo by: KVV)

Carsten Hasberg who further develops the eddy-current sensor under the direction of Professor Christoph Stiller from the KIT Institute for Measurement and Control Technology formulates ambitious tasks: “In the future, trains shall be located with an accuracy of half a meter and be able to drive at braking distance like cars.” For comparison: Today’s standard wheel-counting devices that are mounted to the rails allow to determine the position of trains with an accuracy of about a kilometer only. Without investing a cent in infrastructure, twice as many trains may drive on the existing railway system in the future, as underlined by Hasberg.

The charm of the project lies in the fact that use not only of frequently driven tracks may be increased in efficiency. Additionally, less used track sections may be operated at far lower costs when using onboard autonomous locating systems. Sophisticated wheel-counting devices connected by several kilometers of cables along the tracks are no longer required.

Since August 2007, scientists have tested the eddy-current sensor and satellite location in AVG tram cars driving from Ettlingen into the Black Forest to Bad Herrenalb. In addition, the DemoOrt consortium is operating a test section of 30 km length in the Slovakian High Tatra. There, the locating system is checked thoroughly under difficult climatic and challenging geographical conditions.

In early 2009, the project will be completed. The next step will be a railway section, on which the new locating system actually takes over operation responsibility. Then, the partner and railcar manufacturer Bombardier will commercialize the locating system. This technology could also be used in a novel collision prevention system.