A Science Campus in the Heart of the City

KIT Submits First Concept for the Use of the Wildpark Stadium 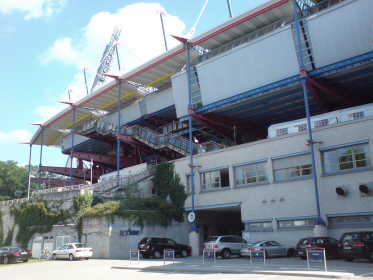 Soon offices and seminar rooms? The grandstand of the KSC soccer club.
Photo by: Universität Karlsruhe

Due to the development following the Excellence Initiative and the foundation of the KIT, the existing campus does no longer provide sufficient space for research and teaching to both students and employees. “An extension in the vicinity is indispensable”, says the President of the Universität Karlsruhe, Professor Horst Hippler. According to him, this could be done best by using the current KSC area. In the first development concept of a science campus submitted by KIT, use of the Wildpark stadium plays a crucial role.

Rapid development of the Karlsruhe Institute of Technology (KIT) will lead to an enormous need for space. As third-party funds acquired by the southern KIT campus are planned to be doubled from presently EUR 110 million within the next ten years, the number of employees will grow from presently 8000 to presumably 9200. Since the funding decision of the government in October 2006, the number of employees working on the southern KIT campus has increased by 350 already.

The situation will be aggravated by the imminent introduction of studies courses for bachelors and masters that will require the students to work in small groups. This means that 450 seminar rooms will be needed simultaneously on the southern campus of KIT.

In parallel, large lecture halls on the southern campus, the Gerthsen hall with 700 seats and two other halls with 200 seats each in the building HMU/HMO, require urgent renovation. If the number of rooms offered will remain the same, the following situation will result: Exams will take place at the canteen, lectures will be held in the evening, employees will have their offices in dark cellars. Work conditions will be far from favorable.

As underlined by President Hippler, the currently three sites of the university (main campus in the city center, campus in the West, and the former Mackensen barracks) show how important an extension of the southern campus in the city center would be. Time between lectures must be long enough for changing lecture halls. Time is not sufficient, if the rooms are located several kilometers away from each other. “On the Mackensen site, building of teaching facilities hardly makes sense, as it is far away from the other university buildings”, emphasizes Hippler. In addition, it is planned to build companies with large installations for vehicle construction on this site. They would significantly disturb university operation.

Apart from lacking seminar rooms, there is an increasing need for specific laboratory and research areas as well as for office areas with standard equipment. “Integration of the KSC area in our campus would close the present gaps ”, says President Dr. Horst Hippler. “It would allow for establishing an attractive science campus in the future – a campus that would be unique in Germany”.

Use of the area around the Wildpark stadium north of the university campus would solve many problems of KIT. According to the first development concept to be implemented from 2013 upon the completion of a new stadium for the KSC soccer club, the boxes and rooms of the grandstand and the KSC office might be turned directly into offices of the university’s sports institute or into meeting, seminar, and working rooms for students. This would not require any high reconstruction costs. The existing sports facilities could be used for training by the sports groups of the university that is presently ranking in third position in Germany. According to the KIT concept, the stadium could also host national and international university sports competitions.

In addition, it would be possible to organize large events for students, such as the UStA summer party, without disturbing the neighbors.

In the medium term, the KSC area of 7.5 ha shall be developed to a “green campus” according to the KIT concept. This area could host faculties and institutes, newly founded organizational units, such as the Karlsruhe School of Optics and Photonics (KSOP), House of Competence (HoC), Karlsruhe House of Young Scientists (KHYS), and the Young Investigators Network (YIN) as well as new research associations. Seminar rooms or lecture halls near the Wildpark stadium could be reached within five to ten minutes.

“Sufficient space for successive and sustainable development is the prerequisite for the success of KIT”, emphasizes Hippler. The rapid development of KIT reflects its significance as an employer and economic factor in the region.