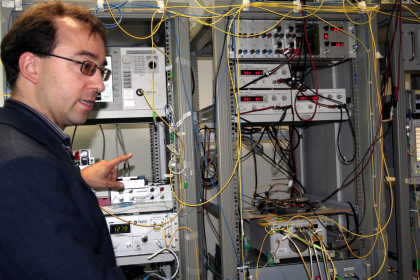 Routers are electronic parcel services. They bundle data, prepare them for delivery, and transmit them. Within the framework of the EU project TRIUMPH, researchers of the Karlsruhe Institute of Technology (KIT) and their partners are developing a new generation of these devices: “Our router manages the data volume of entire cities”, says Professor Jürg Leithold from the Institute of Photonics and Quantum Electronics. The trick of the scientists: Their router controls the electronic data signals with the help of light pulses.

In mid-August, the scientists commissioned one of the first and most rapid fully optical routers in the world at the institute’s laboratory. This router is not controlled by electronic control signals as usual, but with light – “more quickly than electronics could ever do this”, says Leuthold. When started, the router was equipped with all new components built by eight groups of researchers in Europe in the last two and a half years: Lasers, modulators, chips, and new specially developed individual components. They are connected via about 10 km of fiber cable.

The researchers are well within schedule: In February 2009 when funding will expire, a final demonstration is planned. In total, an amount of EUR 5 million was available to the scientists, 3 millions from EU funds, the remaining 2 millions were provided by industry and other partners of the research institutions involved. Presentation of the system at Karlsruhe has already met with the recognition of experts: An international jury permitted the work to be presented in September at the post-deadline session of the European Conference on Optical Communication. This session is reserved for major work in this field.

The project is managed by Jürg Leuthold and his team from the Universität Karlsruhe. In his opinion, the results confirm that optics enters new areas “that cannot even be reached by high-speed electronics”. According to Leuthold, “the new router is controlled and synchronized on the basis of optical data only and links 40 gigabit and 130 gigabit networks”. Leuthold explains the speed of the optical switches by giving an example: The router developed under the project may accommodate data transfer via the internet and phone on the global data highway and disseminate the data transferred at a rate of 130 gigabits per second to the cities of Frankfurt, Karlsruhe, and Stuttgart. “Each city would receive its parcel of 43 gigabits per second”, says Leuthold. Vice versa, the router can bundle the data of the three cities to a single high-speed signal of 130 gigabits per second. For this purpose, it synchronizes the data of the three cities to the same speed and the same optical signal wavelength. 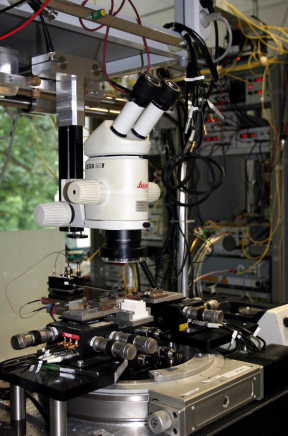 Promising test: At the laboratory of the Universität
Karlsruhe the new router was tested successfully.
(Photo by: Universität Karlsruhe)