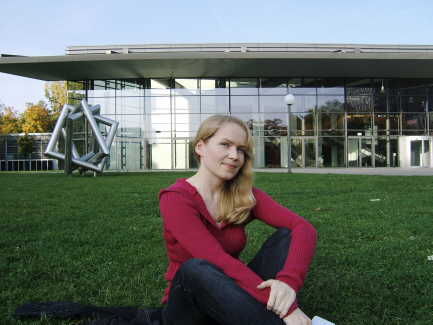 Happy winner: Anna Gossen in front of the KIT audimax (Photo by: Private)

Anna Gossen, student of information science at KIT, is the winner of a worldwide competition of ideas for innovators and enterprise founders. She and her team are awarded the Cisco I-Prize for their well-founded business idea concerning the efficient energy management of enterprises and households. Anna Gossen’s group of inventors succeeded over more than 2500 other competitors from 104 countries. The prize awarded by the Cisco Systems enterprise at San José, USA, carries a value of 250,000 US$.

This also is a private story of success, as the German-Russian team of innovators also includes Anna Gossen’s husband Niels Gossen, student of information science at the Hochschule Karlsruhe –Technik und Wirtschaft (University of Applied Sciences, Karlsruhe), and her brother, Sergey Bessonnitsyn. The latter is systems engineer at a telecommunications company in Russia. The team of Anna Gossen developed the concept from both countries via online collaboration tools.

Moreover, the business plan and the presentation were set up at virtual meetings.

“I was told about the competition accidentally by students here at the university!”, says Anna Gossen. Now, she is very happy to have the opportunity to further develop her idea with her team as a business field of an international enterprise and to enhance energy efficiency. Her energy management system, however, was not the only business idea that was submitted to the competition by her and her team. In total, 14 problem solutions and ideas were presented by Gossen. They extended from communication infrastructure to web services to an idea that is supposed to increase the safety of children on streets. “I often think about how life can be made easier”, says the born Russian, who has been living in Germany for six years now and studying general information science at the Universität Karlsruhe since 2006. Now, she is in the 5th semester and wishes to specialize on telematics.

“We are very proud of the fact that a student of our faculty won against such strong international competitors with her business model”, emphasizes Professor Heinz Wörn, Dean of the KIT Faculty of Information Science. “This also reflects our comprehensive education of information scientists in theory and practice based on the results of current research.”

The Cisco I-prize was created at Bangalore in 2007 as a competition of ideas for innovators and young entrepreneurs worldwide. According to the company, it is aimed at bundling innovations and talents worldwide and at underlining the role of IT and of collaboration in promoting innovation processes. In the online forum, ideas of business and technologies as well as comments were exchanged, teams were formed, and business plans designed, with the chance of implementing the own business idea together. Further information can be found under Cisco.