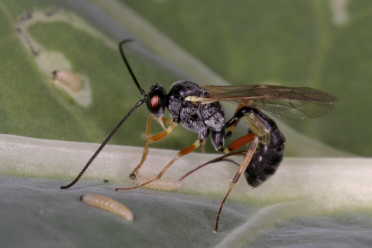 Does not fancy plant sweat: Protecting insects like this parasitic ichneumon
do not come, if the plant smells of isoprene.
Photo by: Tibor Bukovinszky, University of Wageningen

It is known that also plants sweat occasionally. They react to heat and light stress, for example, by evaporating volatile compounds. It has been found, however, that this may also affect ecological protection mechanisms. For the first time, scientists of the Karlsruhe Institute of Technology (KIT), together with their cooperation partners from the Dutch University of Wageningen, have demonstrated that a component of this “plant sweat”, the hydrocarbon isoprene, repels protecting insects in the neighborhood of plants. Normally, the plants attract these biological bodyguards with volatiles when they are attacked by herbivorous pests. The study will be published in this week’s online edition of the proceedings of the National Academy of Sciences (Online Early Edition).

For various purposes, plants produce large amounts of volatile compounds. The globally most important in terms of quantity is the hydrocarbon isoprene, a secondarily effective greenhouse gas that also plays a major role in the formation of summerly photo smog episodes. At high temperatures, isoprene is sweated out in particular by trees like oaks, poplars, and willows that want to protect their photosynthesis system. It has not been known so far whether isoprene also affects other biological systems.

The study of the scientists of the KIT Institute of Meteorology and Climate Research (IMK) and their Dutch colleagues from the Entomological Laboratory of the University of Wageningen now confirms that the protection mechanism against overheating may weaken another, also gaseous protection mechanism. Plants protect themselves against herbivorous insects by releasing attractants to call protecting insects, such as certain types of wasps, for help. These flying bodyguards eliminate caterpillars by laying their eggs into them or eating them. With the help of transgenic plants containing an implanted gene for the production of isoprene, the scientists proved that protecting insects are repelled by isoprene. The genetically modified plant, an Arabidopsis species (Thale cress) frequently used as a model system, attracted less protecting insects, although it produced the same amount of attractant. Additional studies with the olfactory organs of protecting insects confirmed that they can smell isoprene. “Consequently, the composition of the ambient air surrounding the plants plays a much more important role than assumed so far, if the plants wish to protect themselves against pests”, explains Professor Jörg-Peter Schnitzler from the IMK. According to Schnitzler, the plants’ protection strategy may fail in the vicinity of isoprene producers.