Success Story of a Temporary Solution 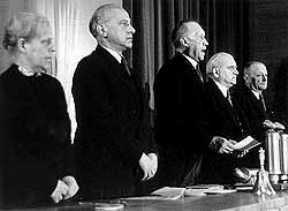 “60 Years Basic Constitutional Law – Constitution with Pretensions and Reality”, this is the heading of the KIT Colloquium Fundamentale in the winter semester 2008/2009. The presentations organized by the ZAK | Center for Applied Cultural Science and Studium Generale will focus on the German basic constitutional law from many perspectives with renowned speakers. During the opening event on November 06, the President of the Federal Constitutional Court, Hans-Jürgen Papier, will talk about “Constitution and Constitution Change”. The series of events will be completed on January 29 next year by the Federal Minister of the Interior, Wolfgang Schäuble. All presentations will be open to the public, admission will be free. The events will take place on thursdays at 18.00 hrs on the premises of the Universität Karlsruhe.

On May 23, 1949, the German basic constitutional law entered into force in the Federal Republic of Germany. Prior to its 60th anniversary, the presentations organized by the Colloquium Fundamentale will bring to mind the eventful history of the origins of the constitution that was initially considered to be a temporary solution for a divided country. Moreover, acknowledged experts from science, politics, jurisdiction, and journalism will focus on how the constitution has shaped real life in the Federal Republic of Germany and which changes it has experienced. Pretensions and reality of the constitution, the compatibility of individual articles, and protection of human dignity will be discussed controversely. Moreover, the basic law will be analyzed as the constitution of the reunified Germany in a union of European states.

The Colloquium Fundamentale organized by the ZAK | Center for Applied Cultural Science and Studium Generale is one of the central series of presentations at the KIT. It is held every semester and covers an interdisciplinary topic by presentations, debates, and podium discussions. The Colloquium Fundamentale addresses students and KIT employees as well as the interested public. Every winter semester, a topic of sociopolitical relevance is discussed. In the summer semester, it is focused on a research area and its interaction with society.

Overview of the Dates of Presentations