Switches of the Future: Electron Islands on Nanotubes 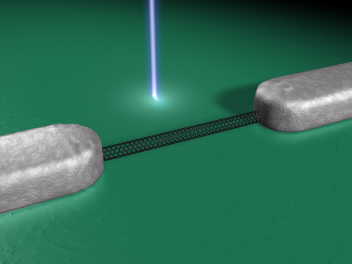 Switched off: With an electron beam, conductivity of a nanotube
may be reduced locally by a factor of 1000.
Photo by: Christoph Marquardt, Forschungszentrum Karlsruhe

Due to their special optical, electronic, and mechanical properties, nanotubes are the shooting stars in nanoscience. Scientists of the Karlsruhe Institute of Technology (KIT), supported by the DFG Center for Functional Nanostructures (CFN), have now discovered an unexpected electronic effect that may lead to a breakthrough in the manufacture of novel switching elements in the medium term.

The scientists from the Institute of Nanotechnology (INT) succeeded in reducing the conductivity of nanotubes by a factor of 1000 at individual, exactly defined points by means of an irradiation with electrons. In this way, they constructed minute dams in the electronic flow. When applying a high voltage, these points conduct current again. The nanotubes themselves remain undamaged. “With a relatively small expenditure, we can generate a gigantic effect that is reproducible and reversible. This will have a major influence on the use of nanotubes in novel computer chips”, underline Dr. Ralph Krupke and Christoph Marquardt from the INT.

For the experiment, the physicists constructed a component comparable to a transistor, in which individual nanotubes were placed between two electrodes. An oxide layer served as carrier material. The arrangement was put into an electron microscope and the electron beam was guided vertically over the nanotubes. In this way, the scientists generated precisely defined places of about 10 nanometers in dimension, which no longer conducted any current. “With this, we open a door to another field of physics”, explains Krupke. The physicist refers to so-called quantum dots. Up to now, their manufacture and integration in circuits has required a considerable expenditure. “These quantum dots are nothing else than small islands that can accommodate a few electrons only”, says Krupke. These quantum dots can be switched and controlled like transistors, but are far smaller than conventional semiconducting transistors. By means of the new INT process, integrated quantum dots of defined size may be produced on a nanotube by scanning two closely adjacent points with an electron beam.

The scientists assume that the effect discovered is due to the carrier material. Some of the electrons from the electron beam get stuck in the oxide layer. These electrons then interfere with the electronic system in the nanotubes and make them locally non-conducting. By applying a high voltage, the “interfering electrons” are removed again.