The Next Step Towards Biofuel 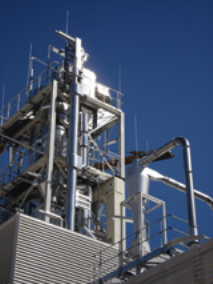 The bioliq® project of the Karlsruhe Institute of Technology (KIT) goes new ways to produce high-quality synthetic fuels from biomass. An amount of EUR 24.85 million will be invested in the second stage: Forschungszentrum Karlsruhe GmbH and Lurgi GmbH have agreed on the construction of an entrained flow gasifier to produce synthesis gas.

The contract will be signed on Friday, 28, 2008, 14 hrs, at the bioliq® plant (building 670 of Forschungszentrum Karlsruhe). Journalists are cordially invited.

By means of the multi-stage bioliq® process, fully synthetic diesel or motor fuel can be produced from straw and other agricultural and forestry residues. The quality of this fuel is far superior to that of other biofuels and mineral oil products.

Synthetic fuels, also called BtL fuels (biomass to liquids) reduce the dependence on fossil resources and the amount of health- and climate-relevant products of combustion. Moreover, they do not increase the carbon dioxide (CO2) content in the atmosphere, i.e. they are CO2-neutral. The bioliq® process developed by the Karlsruhe Institute of Technology (KIT) will now be implemented technically in cooperation with Lurgi. It is tailored to the regional crops of biomass with its mostly very low energy content and, at the same time, allows for fuel production on a large technical scale and, hence, in an economically efficient manner.

View into the bioliq® plant.
(Photo by: Markus Breig)

In a decentralized first step, the biomass is converted into a transportable liquid intermediate product of high energy density (bioliqSynCrude®) by a so-called fast pyrolysis. This intermediate product can be transported in an economically efficient manner over large distances to large facilities producing the synthesis gas and fuel. The fast pyrolysis pilot plant, the first stage of the bioliq® plant, is presently being commissioned at KIT.

Now, the second step of the bioliq® process, the synthesis gas production from the bioliqSynCrude® intermediate product, is being planned. Forschungszentrum Karlsruhe GmbH and Lurgi GmbH, a leading company in the field of process technology and plant construction, have agreed on the construction and joint operation of the entrained flow gasifier. Half of the costs of synthesis gas production is funded under the Funding Program for Renewable Resources of the Federal Ministry of Nutrition, Agriculture, and Consumer Protection (BMELV), represented by the Expert Agency for Renewable Resources (FNR). Shares of 25% each are borne by the partners Forschungszentrum and Lurgi. The contracts will be signed in the presence of representatives of the Baden-Württemberg State Ministry of Economy. The state of Baden-Württemberg largely supports the research and development work.

The operation principle of the entrained flow gasifier used is based on the MPG (multi-purpose gasifier) technology developed by Lurgi. So far, it has been used mainly for residues from petroleum processing. Meanwhile, it has been adapted to the requirements of the bioliq® process. The planned entrained flow gasifier is designed for a thermal power of 5 MW. This corresponds to a throughput of about 1 t bioliqSynCrude® per hour. Planning and building of the plant will take 34 months. The gasifier is planned to be started up in autumn 2011. By 2012, the third stage, a downstream gas processing and synthesis unit, will complete the pilot plant.

The major process feedstock is dry biomass, such as grain straw, hey, residual wood, bark or material from landscape management. This wide variety of agricultural and forestry residues and the possibility of using whole plants open up a volume potential that is far above that of the biofuels of the first generation, biodiesel and bioethanol. According to data of the FNR, 15% of the fuel consumed by the transport sector in Germany might be covered by bioliq® fuels until 2015 already. In addition, fuel production does not compete with food production. By an appropriate synthesis, the BtL fuels may be adapted easily to current and future emission standards and engine technologies.

However, the organic feedstocks mentioned have very low energy densities and can therefore be transported in an economically efficient manner over short distances only. For this reason, a liquid suspension (bioliqSynCrude®) of pyrolysis oil and pyrolysis coke is produced first at decentralized fast pyrolysis plants which are located only up to 25 km away from the biomass producers.

At a central plant for synthesis gas and fuel production, the bioliqSynCrude® is pre-heated to about 80°C, pressurized, and sprayed into the entrained flow gasifier. The gasification medium is oxygen. Conversion into synthesis gas takes place at temperatures above 1200°C and a pressure of up to 80 bar. The bioliq® gasifier to be built at Forschungszentrum Karlsruhe will be equipped with a cooling shield to control slag flow. Due to its modular design, the gasifier geometry can be tailored to the flow conditions and reaction requirements of the gasification process. The bioliq® pilot gasifier is equipped with sophisticated measurement technology, in order to generate reliable data to evaluate and optimize the gasifier stage.

In a third step, the synthesis gas produced under high pressure is cleaned in several steps and passed on to the downstream synthesis stage. An expensive intermediate compression of the gas is not required. From the synthesis gas, synthetic fuels and many important chemical basic products can be produced. These fuels are cleaner, more compatible with the environment, and performing better than petroleum-based fuels. Moreover, they can be tailored precisely to requirements of automotive manufacturers and stricter exhaust gas standards.

The costs of biomass-based production of high-tech fuel will presumably amount to around 50 Eurocents. Costs of the biomass, which presently are of the same order, have to be added. Hence, the costs of 1 l high-tech fuel would be about EUR 1.

In 2009, the bioliq® plant will be one of the selected 365 locations in the “Land der Ideen“ (state of ideas), a Germany-wide competition under the auspices of the Federal President.