The Art of Designing 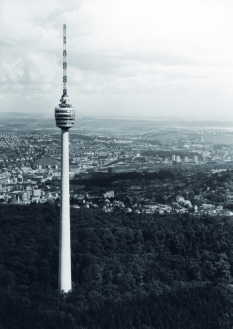 One of his most famous buildings in the southwest of Germany is the Stuttgart TV tower. On the occasion of the 100th birthday of construction engineer Fritz Leonhardt, the Südwestdeutsches Archiv für Architektur und Ingenieurbau (saai) of KIT shows a retrospective in Stuttgart on June 13 to July 26. Media representatives are invited by saai before the opening of the exhibition to attend a press conference and a preview of the exhibition at the LBBW Forum, Hauptbahnhof 2, Stuttgart, at 11 a.m. on Friday, June 12.

Fritz Leonhardt always referred to bridge building as his great passion which “stays forever young and creates enthusiasm for a lifetime.” More than 30 innovations can be traced back to him and his co-workers. After World War II, for instance, they paved the way for pre-stressed concrete construction in Germany. Engineers all over the world have since used the timed shifting technique invented by Leonhardt and his colleagues. Examples of bridg es built under Leonhardt’s direction are the Cologne Deutz bridge (1946 – 1948) and the Düsseldorf northern bridge (1953 – 1957). In the Stuttgart TV tower (1953 – 1956), a reinforced concrete pipe replaced the steel lattice masts used before. The slender tower became an international model. The Leonhardt und Andrä office built a number of other towers all over Germany in the following years.

In its “The Art of Designing” retrospective at the Stuttgart LBBW Forum, saai is now showing exhibits from the legacy of Fritz Leonhardt: personal objects underlining his biography as well as photographs and drawings of his buildings. Loans supplement the material of saai. Movie animations, original building components, and twenty architectural models specially built for the purpose show the work of the construction engineer. The exhibition runs from June 13 to July 26; it is open daily between 10 a.m. and 8 p.m. At the press conference on June 12, curator Christiane Weber and project leader Joachim Kleinmanns of saai present a guided tour of the exhibition.

Representatives of the media can register for the press: E-Mail

More information of the Exhibition.

Born 1909; between 1927 and 1931, student of construction engineering at the Stuttgart Technical University, where he also obtained his Ph.D. In 1934/1935, Leonhardt worked with the bridge building office of the Reichsautobahnen at Stuttgart, then joined the Reich Ministry of Transport in Berlin. In the 1940s, he was consultant to, and head of, various engineering offices, inter alia in Berlin, Munich, and Stuttgart. In 1953, he founded the Ingenieurbüro Leonhardt und Andrä in Stuttgart. Between 1958 and 1974, Fritz Leonhardt was professor for solid construction at the Stuttgart Technical University, whose president he was between 1967 and 1969. He died in Stuttgart in 1999.