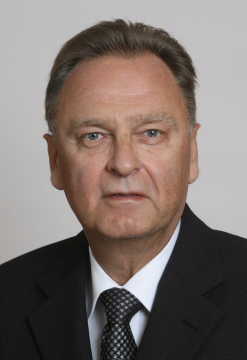 The German constitution, the Basic Law, is now sixty years old. How it originated and was developed further is shown by the “Intervention Requested! 60 Years of Basic Law of the Federal Republic of Germany” exhibition. ZAK I Center for Applied Cultural Studies and Studium Generale of KIT shows the exhibition in the lobby of the Karlsruhe Audimax in the period between June 9 and July 15. The President of the Federal Constitutional Court, Professor Hans-Jürgen Papier, will speak at the opening ceremony on June 9. On July 7, the program features a discussion about “60 Years of Freedom of the Arts.”

The exhibition, which was designed by the Bundeszentrale für politische Bildung (Federal Agency for Political Education, bpb) and the Stiftung Deutsches Historisches Museum Berlin (German Historical Museum, Berlin, Foundation), presents the Basic Law as the constitution of a re-unified Germany in a union of European countries, from its inception to the present. It is subdivided into eight topical units: Origins of the Basic Law; Basic Rights; Federal Constitutional Court; Elections; German Unification; Europe; Equal Rights for Women; Migration. Admission to the exhibition is free. The exhibition is addressed to the interested public, especially to schools. It adds to the Colloquium Fundamentale organized earlier by ZAK about “60 Years of Basic Law –Constitution with a Promise and Reality”.

Hans-Jürgen Papier, President of the Federal Constitutional Court, will open the exhibition in the lobby of the Karlsruhe Audimax (university campus, Straße am Forum 1, building 30.95) at 7.30 p.m. next Tuesday, June 9. Thomas Krüger, President of the Bundeszentrale für Politische Bildung (Federal Agency for Political Education) will be another guest attending the ceremony. The exhibition will be open between 9 a.m. and 6 p.m. Mondays to Fridays (except on holidays) until Wednesday, July 15. At closing date, 7.30 p.m. on July 15, Siegmar Mosdorf, former parliamentary undersecretary, will read texts by Carlo Schmid, one of the founding fathers of the Basic Law.

At 7.30 p.m. on Tuesday, July 7, ZAK in cooperation with the TechnologieRegion Karlsruhe will arrange a discussion about “60 Years of Freedom of the Arts.” Participants include the Chairman of the Deutscher Kulturrat (German Cultural Council), Max Fuchs, and the Director of the Staatliche Kunsthalle Karlsruhe, Pia Müller-Tamm.

The “Intervention Requested!” exhibition is part of the “Karlsruhe, Meeting Place of Science – The Challenge of Democracy” project funded by the Robert Bosch Foundation in the Year of Science 2009.