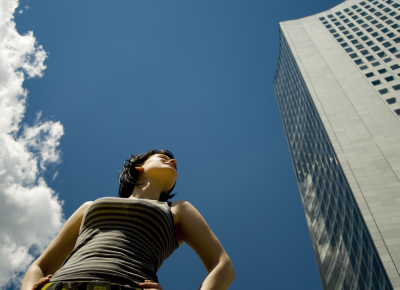 For the 7th time, the Erna Scheffler award is granted by the So-roptimist Club Karlsruhe for excellent scientific achievements of two young women at the Universität Karlsruhe. The award that is granted every two years is named after the first female judge at the Federal Constitutional Court in Germany, Dr. Erna Scheffler, who was a committed fighter for the equality of women. The award ceremony will take place on June 19, 17 hrs, at the Federal Constitutional Court. Journalists are cordially invited.

The Erna Scheffler diploma award goes to the physicist Jennifer Girrbach from the Institute for Theoretical Particle Physics. The standard model of particle physics very precisely describes the fundamental components of matter and the forces acting between them at the energies that are experimentally accessible today. Still, there is substantial evidence of physical relationships beyond this standard model. In her diploma thesis, Girrbach expands the above model and comprehensively analyzes the effect of supersymmetrical particles on so-called processes violating the lepton number. The Large Hadron Collider (LHC) at CERN, Geneva, that will start opera-tion again in autumn this year, will provide an opportunity to find supersymmetrical particles.

With more than 91,000 members and 3100 clubs in 125 countries, Soroptimist International (SI) is the largest international service or-ganization of working women. The first club was founded in 1921 at Oakland/California. The name “Soroptimist” is derived from the Latin “sorores optimae“ (the best sisters). The German union of Soropti-mist International comprises 181 clubs with about 5300 members. The club at Karlsruhe was founded and chaired by Dr. Erna Schef-fler in 1963. Presently, it has 35 members. SI grants financial and personal help for a number of care projects on the local, national, and international level.

Note: For security reasons, prior registration with the Federal Constitutional Court is required under:

protokoll ∂does-not-exist.bundesverfassungsgericht de (please register until Wednesday, June 17). Kindly bring along your identity card for the entry check by the Federal Police.